I have always thoroughly enjoyed listening to radio host Laura Ingraham (center, with my wife & I). She’s a reformed lawyer who has authored two books and hosts one of the most popular syndicated radio shows in the country. 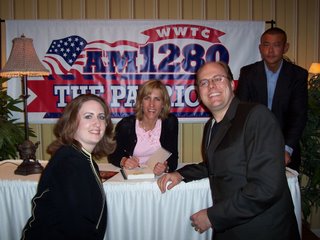 Her passion for conservative politics is beyond reproach. However, since her visit to Iraq last month, she has taken that passion to another level. It’s one thing to proclaim support for the troops and their mission in the Iraq war, which Laura has genuinely done. But it seems a whole new perspective has overcome her since she broadcast her radio show from Iraq.

So it was a joy to see Laura taking on NY Times reporter David Gregory and Democrat strategist James Carville on the Today Show yesterday.

Laura definitely took it to the guys when given her first opportunity to respond to Gregory’s point that President Bush is trying to speak candidly about the war but is not being heard.
Ingraham: "Well here, here's what I think David. I think with all the resources of networks like NBC. The Today show spends all this money to send people to the Olympics, which is great, it was great programming. All this money for ‘Where In The World Is Matt Lauer?’ Bring the Today show to Iraq. Bring the Today show to Tal Afar. Do the show from the 4th ID at Camp Victory and then when you talk to those soldiers on the ground, when you go out with the Iraqi military, when you talk to the villagers, when you see the children, then I want NBC to report on only the IEDs, only the killings, only, only the reprisals. When people are on the ground whether it's recently, David Ignatius of the Washington Post, whether it's recently..."
Gregory: "Okay but, but Laura let's be, hold on, let's be..."
Ingraham: "Let me finish David because you got, you guys are, no, no, let me finish, let me finish..."
Gregory: "Wait a minute Laura! Wait a second! If you want to be fair. First of all the Today show went to Iraq. Matt Lauer was there, he reported there."
Ingraham: "Did he do a show, did you do a show from Iraq?"
Gregory: "Okay and we, and we've got a bureau there so..."
Ingraham: "Yeah. David, David to do a show from Iraq means to talk to the Iraqi military to go out with the Iraqi military, to actually have a conversation with the people instead of reporting from hotel balconies about the latest IEDs going off. It is very difficult in Iraq. People are struggling..."
Gregory: "And you, and you think Iraq is safe enough to, have you been there long enough to venture outside the hotel balconies?!"
Ingraham: "David, yes I did. I wasn't in a hotel balcony I was out with the U.S. military and it can be done in any part of the country.”
Well, Gregory got one thing right. Matt Lauer did indeed report from Iraq just last August. I seem to recall Lauer attempting to perpetuate the “doom-and-gloom” reporting that has taken place for most of the past three years.

Here’s an excerpt of an interview done with an optimistic Captain Sherman Powell in Baghdad.


Lauer: "Don't get me wrong, I think you're probably telling the truth, but there might be a lot of people at home wondering how that could be possible with the conditions you're facing and with the insurgent attacks you're facing. What would you say to those people who are doubtful that morale could be that high?"

Powell: “Well sir, I'd tell you, if I got my news from the newspapers also I'd be pretty depressed as well!"

Lauer: “What don’t you think is being correctly portrayed?”

Powell: “Sir, I know it’s hard to get out and get on the ground and report the news, and I understand that, and I appreciate that fact. But for those of us who have actually had a chance to get out and meet the Iraqi Army and Iraqi police and go on patrols with them, we are very satisfied with the way things are going here and we are confident that if we are allowed to finish the job we started we'll be very proud of it and our country will be proud of us for doing it!"

In the fifth year? The tree grows 80 feet!

President Bush has cast a long-term vision for Iraq in the motif of The Chinese Bamboo Tree.

The pessimists, however, are ready to dig up the seed after only three years.
Posted by Brad Carlson at 2:32 AM

I hate to do this but, there is a post on my blog that I would to have you comment on. It is listed under new kb's corner.

It is dealing with a family issue and I would love to have your thoughts about it. Just to let you know when you do post your comment will not show up right away. It is sent to my email.

Again if you would check it out that would be great.

By the way Laura is great. She did in fact learn alot and grew alot of respect for everyone over there. She has a fist hand understanding of what is going on over there and wants all to know.

She always did respect our service men and women but it has only gottem much bigger sence her trip.