It's the first Sunday in the Joe Biden administration, so it's gonna be a busy and hilarious four years on the Northern Alliance Radio Network. Today's 2-hour edition of my broadcast The Closer gets started at 1:00 PM Central Time.

A lot to talk about in Biden's first four days as President of the United States, specifically his talk about unity but actions showing otherwise.

At 1:15 CT, Ricochet Editor-in-Chief Jon Gabriel will join the broadcast to talk about the GOP post-Trump, the dysfunction of his home state's (Arizona) Republican party, what to expect in the Biden administration, etc.

You can listen live in the Twin Cities at AM 1280 or, if you're near downtown Minneapolis/West Metro area, 107.5 FM on your radio dial. In and out of the Minneapolis-St Paul area you can listen to the program on the Internet by clicking this link, or check us out via iheart radio as well as Amazon Alexa (just say "Alexa, play The Patriot Minneapolis"). If you're unable to tune in live, please check out my podcast page for the latest show post.

Tampa Bay Buccaneers (+3-1/2) at Green Bay Packers: In last season's NFC title game in San Francisco, the Packers faced the team which dealt them their worst loss in the 2019 regular season. They were once again soundly defeated by the 49ers. History somewhat repeats itself here as the Pack will take on a Buccaneers squad which crushed them 38-10 back in October, easily Green Bay's worst performance of the 2020 regular season. The difference this year is the Packers are hosting the conference championship game.

Bucs QB Tom Brady is just piling on at this point as he will be appearing in his fourteenth conference title game, with this being his first in the NFC. Having already won six Super Bowl rings (a record for a player) in nine SB appearances (also a record), what more can he accomplish? Well if the Bucs win, they will be the first team in NFL history to play the Super Bowl in their home stadium.

On the other side of the ledger, Packers QB Aaron Rodgers is looking to appear in that elusive second Super Bowl. This will be the Pack's fourth NFC title game since their Super Bowl XLV victory just under ten years ago. Rodgers is a sure fire Hall of Famer but if he is to be mentioned in the same breath as legends like Brady, Joe Montana and Peyton Manning, he needs to have multiple Super Bowl rings. I believe he'll have that opportunity in two weeks.

Buffalo Bills (+3) at Kansas City Chiefs: The Bills have one of the most prolific offenses in the NFL, ranking second in scoring (the Chiefs are #1) and total yards. However, the only game in the 2020 regular season which the Bills had under 300 yards total offense was week six at home against.....Kansas City. The Bills mustered only 202 yards in a 26-17 loss.

The key to this game is how effective Chiefs all-world QB Patrick Mahomes will be now that has been cleared to play. Mahomes suffered a concussion last week against Cleveland, thus sitting most of the second half. However, even if Mahomes isn't 100%, the Chiefs may get a reprieve if rookie RB Clyde Edwards-Helaire plays for the first time since week 15. Edwards-Helaire gashed the Bills' porous run defense for 161 yards rushing in their regular season matchup, so his presence would help mitigate (though not completely offset) Mahomes being subpar.

I'm calling this game a toss up.

Posted by Brad Carlson at 12:00 AM No comments:

I guess that's none of our business

I hate to rain on the "YASSSSSS KWEEEEEEN" parade amid Kamala Harris becoming the first ever female Vice President of the United States, but here's something you oughta consider. 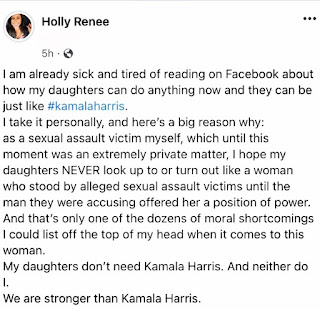 - With a Democrat now occupying the White House, much of the media which covers the presidency will now return to its slumber.

On Sunday, Jan. 17, Vice President-elect Kamala Harris sat down with Jane Pauley of CBS News "Sunday Morning." Pauley treated Harris to a full-on journalistic massage. At no point was Harris asked a tough question; at no point was Harris treated as anything other than an idol worthy of worship. Perhaps the most awkward manifestation of this sycophancy came when Harris -- an extraordinarily and transparently manipulative and mechanical politician -- spouted a canned speech about relentlessness. "I was raised to not hear no -- let me be clear about it," said Harris. "I eat no for breakfast!"

This prompted a spasm of ecstasy from Pauley, who immediately reflected Harris' bizarrely inappropriate laughter with an enormous grin of her own.

It will be four long years.

Especially with this line of questioning.

PSAKI: "This is such a good question!" pic.twitter.com/PafHiBtRUs

The sad thing is the media has absolutely zero self-awareness of its role in the woeful lack of trust in its institution.

-When reading the CBS News headline "Most Americans don't know what's in the Constitution: "A crisis of civic education," my only response is.....

- On Inauguration Day Wednesday, much was made of Kamala Harris becoming the first ever female Vice President of the United States. Within hours, the Biden administration essentially conveyed that gender is irrelevant.

In his inaugural address, President Joe Biden stressed he wants to be the president of all Americans—left and right—and bring healing and unity to the nation. Actions speak louder than words. And on his very first day in office, Biden signed a radically divisive executive order mandating the transgender agenda.

Here’s what it says:

“Children should be able to learn without worrying about whether they will be denied access to the restroom, the locker room, or school sports.”

“People should be able to access health care and secure a roof over their heads without being subjected to sex discrimination.”

And here’s what it means:

In the days leading up to Joe Biden's inauguration as 46th President of the United States, I've seen a good number of social media posts expressing jubilation, relief, etc.

Some folks have expressed how grateful they will be to finally get a good night's sleep now that the eeeeeeevil Donald Trump will no longer occupy the White House. I've also seen a decent number of posts lamenting an unhealthy lifestyle due to lack of motivation to eat right, exercise, etc. Others shared their sorrow over not having any enjoyment out of life the past four years, including abandoning sexual relations (SERIOUSLY!) with their partner due to not wanting to bring a child in to this world.

But now that doddering old fool Biden will be our Commander in Chief, all is right with the world in the eyes of proggies whose happiness is predicated upon who resides at 1600 Pennsylvania Ave.

So with all that in mind, lemme throw something out there if any of the above applies to you. Your inability to have even a scintilla of enjoyment out of life for the past 4+ years says a heckuva lot more about you and your character than it does about Trump himself.

Posted by Brad Carlson at 12:00 PM No comments:

In the immortal words of Tanya Tucker: It's a little too late to do the right thing now

I can't help but think that if Trump had conveyed even a semblance of this graciousness and humility beginning the Saturday after Election Day (when Joe Biden was officially projected the winner of the presidential election), the Republicans would have moved forward with tremendous optimism after over-performing in U.S. House races and not losing a single governor's office or state legislature. Also, the focus would have been shifted 100% on winning the two Senate runoff elections in Georgia, with GOP Sens. Perdue and Loeffler likely prevailing and keeping the party in a comfortable majority.
Instead, for two solid months since Election Day, Trump inflamed his most ardent supporters with baseless allegations* of rampant fraud as well as denigrated elected officials in the state of Georgia for not overturning his loss to Biden in that state. As a result, the GOP brand (for now) is even more toxic than before Trump was elected and there were seeds of doubt planted in the minds of Georgia Republicans that just enough stayed home two weeks ago, resulting in the loss of the Senate majority.
As a result, Trump's undeniably positive accomplishments take a back seat to what has transpired over the past 11 weeks. Sadly for him, he doesn't appear to have the ability to be introspective, thus the consequences of the scorched earth strategy he implemented will not be apparent to him. Sad.
*To be clear: I'm not saying there was zero election fraud. What I am saying is there is no evidence to suggest it was on a scale that swung the contest from Trump to Biden.
---------------------------------------------
Posted by Brad Carlson at 9:06 PM No comments:

Check out the comment of Tampa Bay Buccaneers safety (and University of Minnesota alum) Antoine Winfield, Jr. after his club ousted the New Orleans Saints from the NFL postseason.

The sting of my Vikings losing the 2009 NFC Championship Game has never really gone away. Heck, I can't even watch highlights of the 1998 title game loss, much less the '09 contest. All that said, I appreciate Winfield, Jr. thinking of his old man's team as his Buccaneers squad got to within one game of the Super Bowl. It happens to coincide with the fact that I've rooted for Tampa QB Tom Brady to win every postseason game since his first Super Bowl championship in February 2002, which began an 18-year New England Patriots dynasty.

I'm definitely on the Bucs' pirate ship the rest of the way!

Posted by Brad Carlson at 10:54 AM No comments: