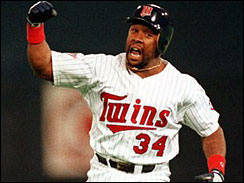 The sorrow surrounding Kirby Puckett’s death, and the subsequent reminiscing of his life, has endured throughout Minnesota this entire week.


Dark Star knew it wouldn't be easy to do his show Monday night hours after the death of Twins great Kirby Puckett. But shortly after going on the air, the WCCO Radio host realized this was something special.

"One of the first calls was Justin in Menomonie [Wis.]," Star said. "He said, 'I want to tell you my memories of Kirby from when I was 5 years old. I had a pair of Kirby Puckett pajamas with No. 34 on the back of them, and I wore them every single night until they were worn to a frazzle. I still have them today.' "

On and on, the calls continued to Star's late-night show. It would be the same on KFAN, with callers filling up the phone lines to share their Puckett stories. "It occurred to me very quickly that I'm going to do the most significant thing I've been afforded an opportunity to do in 20 years [on WCCO], and that was to allow people to grieve over the loss of Kirby Puckett," Star said. "If I'm in this business another 20 years, I'll never have that kind of responsibility again."

Sports talk radio usually is filled with predominantly male callers worried about such pressing matters as Daunte Culpepper's latest e-mail message. But this week the airwaves became much more. They served as a gathering place for people to grieve and remember.

Rosen, who was with the Twins in Fort Myers, Fla., when Puckett passed away in Arizona because of complications from a stroke, grew up in the Twin Cities and started at WCCO-TV in the early 1970s. He compared the grieving around the state to that of when former Senator Hubert Humphrey died in 1978.

"I think sign-on to sign-off, especially Monday, [KFAN] could have done 24-7 with Kirby and I don't think anyone would have tired of it," Rosen said. "I was listening going, 'Wow, what a story.' "

Star experienced the same thing. "From the minute we went on the air Monday to the end of the show we didn't have an open phone line," he said. "We have a sponsor that called me and said, 'Don't play our commercials anymore, just play the Spanish [language] home run call of Puckett's home run [from Game 6 of the 1991 World Series]. Here's a car dealer who forfeited his time so people could enjoy part of the wonder of who Kirby Puckett was."


We didn’t learn to appreciate Kirby only after his untimely passing. We were appreciative for every time #34 emerged from the dugout and jogged onto the baseball field.

With a public memorial service taking place this Sunday at the Metrodome, we have one last chance to say goodbye to the most popular player in Minnesota Twins history.

There’s the old adage “You don’t know what you've got until it’s gone.”

But with Kirby Puckett, we knew.

And we loved every minute of it.
Posted by Brad Carlson at 8:01 PM