A Minnesota sports legend passes on. 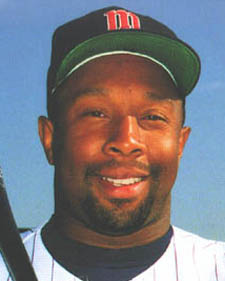 Kirby Puckett
1960-2006
Minnesota Twins hall of famer Kirby Puckett passed away yesterday, eight days shy of his 46th birthday. Puckett suffered a massive stroke Sunday in Scottsdale, Arizona, where he has made his home for the past few years.

I first remember hearing the name “Kirby Puckett” in my freshman year of high school when “Puck” made his major league debut in May 1984. The Twins were playing the California Angels that evening, which meant the game started at 9:30 pm, Central time. I had a habit of being in bed by 9:00 on school nights. I use to call the St Paul Pioneer Press sports hotline when I awoke every morning to catch all of the results from the night before (Yes, kids, there wasn’t always an internet). The recorded message on the morning of May 9, 1984 sounded something like this: “The Twins defeated California last night, 5-0. In his first big-league game, Kirby Puckett went 4-for-5.”

His call-up from the Twins AAA affiliate in Toledo, OH was the stuff of folklore. He flew to LA International airport and took a taxi to “The Big A” in Anaheim. However, he didn’t even have enough money for the cab fare. The Twins employee who paid the tab had no idea what kind of investment that was.

I had been a Twins fan since the mid-70s. Ever since they had traded away Rod Carew after the ’78 season, the club was never much of a factor. In fact, they had just come off two dreadful seasons in 1982-83, losing 102 and 92 games respectively. Baseball was all but dead in the state of Minnesota until Puck came along.

He was one of the catalysts in the Twins winning the 1987 World Series, the first in the franchise’s 27-year history and the first professional championship in Minnesota since the 1954 Minneapolis Lakers.

Given he had such an outstanding career with so many great memories, there is one defining moment: Game 6 of the 1991 World Series. After falling behind 3 games to 2 against the Atlanta Braves, the Twins returned home. Sensing his teammates gloom and doom demeanor, Puck shouted “Hop on my back, fellas. I got this one tonight.” In the game, he leapt high against the right-center field wall to rob Ron Gant of an extra base hit. Puck also drove in three runs, including the game-winning homer in the 11th inning to give the Twins a 4-3 win. The Twins would win their second title in five years with a 1-0, 10-inning thriller in Game 7.

After a stellar 1992 season, Puck was a free agent. Despite higher offers elsewhere, he re-signed with the Twins for 5 years, $30 million! Just 8 ½ years earlier, he was a 24-year old kid who couldn’t afford a $70 cab ride. Now he was one of the highest paid players in a sport he worshipped since his youth in the Robert Taylor homes on Chicago’s rough south side. The projects where Puck grew up were dubbed “A place where hope goes to die.” Yes, Puck truly was one of those “rags to riches” stories.

Puck was one of the most beloved players amongst teammates and opponents. He was equally revered by home fans and opposing fans. He was even borderline worshipped by some media figures. Bob Costas of NBC-TV had a son in 1986 who he named Keith Michael Kirby Costas. Bob Ryan, Boston Globe sports columnist, registered his golden retriever with the American Kennel Club as “Ryan’s Kirby Puckett.”

With all of that adulation, when did things start to crumble beneath Puck?

Many people ascertain that it was Spring Training 10 years ago when the personal decline of Kirby Puckett commenced. He was swinging the bat well that spring. The anticipation of being in the same lineup with Paul Molitor gave the whole Twins team a reason for optimism in the 1996 season.

However, it was one morning in March that year where Puck’s world began to crumble. He awoke with blurred vision in his right eye. He figured he slept funny. Then a black dot appeared in his vision.

As tests would later prove, he had glaucoma.

Puck continued to go through tests and diagnoses. Finally in July that year, he would undergo a risky procedure on his eye which would either heal his vision or render him virtually blind. We all know how that saga turned out.

He was still in the spotlight, with the Twins honoring his retirement in a 1996 pre-game ceremony, retiring his jersey #34 in 1997 and inducting him into the team’s Hall of Fame in 2000. In fact, Puck was often trotted out to generate interest in a Twins franchise which was in the midst of eight consecutive losing seasons (1993-2000). Fans would come out to the Metrodome in pretty good numbers for the various pre-game ceremonies honoring Puck. Once the game started, however, fans would leave in droves.

It was in 2001 when Kirby Puckett reached the ultimate in his profession - induction into the baseball Hall of Fame. He was the second youngest first-ballot inductee behind Sandy Koufax.

Sadly, it proved to be Puck’s last moment of glory in the sport he so dearly loved.

Puckett’s on-field accomplishments were beyond reproach. However, it was learned just a few years ago that he had a rather sordid off-field life. This fun-loving, always smiling character on the field was painted as a low-life off of it. It was alleged in a Pioneer Press article that Puck had mistresses since the mid-80s. While Puck appeared to be a loveable humanitarian in the public eye, his then wife Tonya was supposedly the one spearheading all of the charitable endeavors.

Because the Hall of Fame induction was his last hurrah, Puck’s life appeared to be in a downward spiral. His demise was even a feature story in a March 2003 edition of Sports Illustrated. He had virtually no role within the Twins organization, located at the address which bears his jersey number and name (34 Kirby Puckett Place).

Many within the Twins family had begun to worry about Puckett’s health. There was an alarming genetic trend of his family members dying in their 40s and 50s. Puck, who was in his 40s, was gaining weight at such an alarming pace that many worried about his heart. Rumor had it he moved to Arizona because the climate was better for his health. Others speculated it was to completely withdraw from the public eye. Whatever the case, not much was heard about his life since his April 2003 acquittal of sexually assaulting a woman in a restaurant bathroom.

Then came the stunning news on Sunday. Kirby Puckett had suffered a stroke. There never seemed to be any hope that Puck could recover. Then it was announced yesterday afternoon that he would be taken off life-support.

Then he was gone.

This beloved figure of Minnesota baseball was dead at the age of 45.