There were no Weapons of Mass Destruction.

We invaded this region because their leader was a murderous dictator.

The so-called leader of this country has been on trial for war crimes.

The aforementioned leader, while awaiting continuation of the trail, died today in his jail cell.


Former Yugoslav leader Slobodan Milosevic, the so-called "butcher of the Balkans" being tried for war crimes after orchestrating a decade of bloodshed during his country's breakup, was found dead Saturday in his prison cell. He was 64.

Milosevic, who suffered chronic heart ailments and high blood pressure, apparently died of natural causes and was found in his bed, the U.N. tribunal said, without giving an exact time of death.


I had you going, didn’t I? Didn’t the rhetoric I used to begin this post match that of the talking points uttered by liberals regarding a certain Middle East conflict?

I guess another question would be is where was Cindy Sheehan when the U.S. invaded the Balkans in the 1990s? Sean Penn? George Clooney? Tim Robbins? Jane Fonda?

Oh, that’s right. Bill Clinton was President in the 90s. General Wesley Clark was a Democrat. 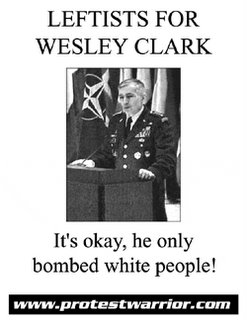