They're not taking it well

I remember Election Night 2012. My Northern Alliance Radio Network colleague Mitch Berg and I were broadcasting live from a MNGOP event that evening where we analyzed the election results. Going in to that Tuesday, I anticipated that our national government would maintain the status quo, in that Barack Obama would be reelected President and Congress would remain split (Dem majority in the U.S. Senate; GOP majority in the U.S. House). So when that became official, I was still disappointed but I had mentally prepared myself for that scenario.

What I was unprepared for in 2012 was the GOP losing majorities in both the MN House and Senate, as well as both ballot measures (Defining marriage as between a man & woman and Voter ID) being shot down. To add insult to injury, my home city of Ramsey elected a granola cruncher lefty mayor and an all leftist city council. I was devastated. I was in a catatonic state the entire 45-minute drive home. Thankfully I had already taken the next day off work since I knew I'd be up late. The next morning was appropriately damp and gloomy.

With that in mind, I decided to look back in my Facebook archives to recall what I had conveyed after what had been a calamitous night for my preferred political party. 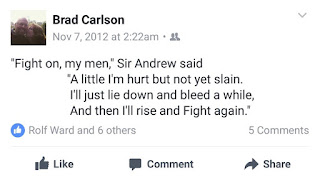 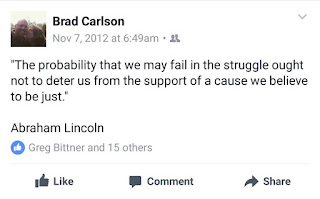 I don't share this to give off a vibe of my being more magnanimous than leftists when my candidates lose. Quite the opposite in fact. I share this because I want people to know I can relate. I have leftist relatives/friends/acquaintances who are still enduring emotional pain. And I get it. I really do. I know how depressing it is when your preferred candidate comes up short despite working so hard on their behalf. So it never occurred to me to gloat when the GOP dominated the 2016 election. So if you too know people in that same situation, telling them to "get over it" is not helpful. Give them time and space.

But as far as those folks who are spewing incoherent statements, sucking their proverbial thumbs, disrupting the lives of innocent people (at the encouragement of a sitting mayor), vandalizing property and suggesting people have to die in violent acts all because they didn't like the outcome of the 2016 presidential election? Yeah, those people can go suck a brick.