Hoist by one's own petard

Over the past couple of weeks or so, Politico (among other leftist media outlets and pundits) weighed in on President-elect Donald Trump's cabinet picks with an all-too-familiar narrative.

White men dominate Trump’s early staff selections
The all-white, all-male lineup comes amid a major initial test of Trump’s pledge to be a president for 'all Americans.'


But just over the past week, Trump has selected Nikki Haley as U.N. Ambassador, Ben Carson as H.U.D. Secretary and Betsy DeVos as Education Secretary. 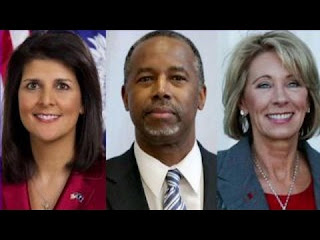 So within a mere seven days, the leftist media (pardon the redundancy) narrative pretty much resembled this:


I wouldn't put it past some of these outlets or talking heads to proclaim that their strenuous objections actually shamed Trump into making his most recent selections. After their 2016 election coverage, the reputations of the mainstream media and lefty pundit class may well be irreparably damaged, so they really have nothing to lose at this point. Couldn't have happened to a nicer bunch of folks, eh?