Go where the narrative leads

Sadly, it's become commonplace in this country to politicize high profile violent crimes while the critically wounded victims are en route to the hospital or the fatally wounded are not even in rigor mortis.

Like many, I was horrified when I first heard the news Monday morning of an "active shooter" on the campus of Ohio State University in Columbus. As is usually the case in chaotic crime scenes, basic facts are not even 100% verifiable until said scenes have been contained. Ah, but that doesn't stop lefties and media (pardon the redundancy) from conjecture and subsequent demagoguery.

Some time ago, Ricochet.com editor-in-chief Jon Gabriel constructed a handy media narrative chart which gives us an indication which direction a story will lead. 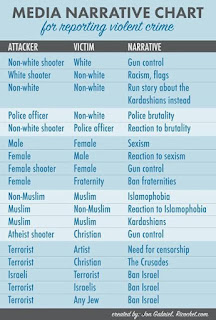 Because it was reported early on that the "active shooter" was non-white, that would lead to the obligatory "gun control" demagoguery.

How @voxdotcom covers an attack by an apparent refugee who didn't even have a gun: "America's gun problem..." https://t.co/OVxBxQKP7N pic.twitter.com/cLVqJ3moxH
— Sean Davis (@seanmdav) November 28, 2016


Not to be outdone, Yahoo! news posted a piece with the headline "Ohio State Gun laws Are Some Of The Most Relaxed In The Nation."

As we know by now, a gun was not used by the attacker.

A Somali-born student at Ohio State University injured 11 people, one of them critically, on Monday when he attacked a crowd of pedestrians on campus in an incident one lawmaker said "bears all the hallmarks of a terror attack."

Authorities said Abdul Razak Ali Artan, 18, plowed a small gray Honda into the crowd outside Watts Hall, an engineering classroom building, just before 10 a.m. ET. Artan then got out of the vehicle and attacked people with a butcher knife before he was shot and killed by a campus police officer.

The officer, identified as Alan Horujko, 28, happened to be in the area because of a reported gas leak. Ohio State University Police Chief Craig Stone said Horujko arrived on the scene and shot Artan in under a minute. OSU Department of Public Safety Director Monica Moll said Horujko had done a "fabulous job."

In a statement, the university said that five of the victims had been struck by the car, five others had suffered lacerations or stab wounds and another person had orthopedic injuries. At least five of the victims were affiliated with Ohio State, either as faculty, students or staff.


So if the media is as predictable as Mr. Gabriel indicates via his "Media Narrative Chart for reporting violent crime," an attack by a self-identified Muslim on non-Muslims means it was a "Reaction to Islamophobia."

Via the International Business Times - Abdul Razak Ali Artan Was A 'Scared' Muslim: Before Ohio State Attack, Student Shared His Faith And Fears About Islamophobia

At the end of the day, the methodology utilized in jihadist killings is irrelevant. Whether it's homemade explosives, knives, vehicles or guns, the focus absolutely needs to be more on the motives of the perpetrators as opposed to the weapon of choice. But as long as we have an agenda driven media combined with the deep pockets of an anti-gun plutocrat, that basic fact will continue to be overshadowed.