Will Owens make hearty request to teammate? (UPDATE: Owens gets #81)

When the Buffalo Bills acquired wide receiver Terrell Owens last week, there’s no doubt they were fully aware of his history with three other franchises. In the space of five years, Owens wore out his welcome with the San Francisco 49ers, Philadelphia Eagles and Dallas Cowboys, due in large part to his petulance and/or divisiveness towards teammates and coaches.

Bottom line is the Bills organization shouldn’t be shocked if Owens continues his malcontent ways once he feels as though he’s not getting the ball enough.

My prediction is the first T.O. controversy will take place even before the 2009 regular season commences. And the source of the controversy? A second year WR by the name of James Hardy.

With T.O. now in the mix, the Bills will have a rather formidable compilation of receivers in Owens, Lee Evans and Josh Reed. So it’s not as if Owens needs to be concerned about Hardy (nine receptions, 87 yards in his rookie season) getting the ball more than he. No, it’s something else Hardy possesses which may cause a kerfuffle. 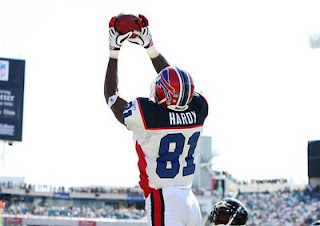 In his entire NFL career, T.O. has always donned the number 81. And since Owens has never struck me as the type who is willing to change his ways, he’ll insist on maintaining his jersey number. Sports protocol usually dictates that a newly signed player will make a cash offer to a teammate for his jersey number or the established teammate will offer the number voluntarily. So if Hardy does not give up his number willingly, my prediction is T.O. will call him out. Owens will say soemthing to the effect that Hardy is not nearly accomplished enough to be in a position to command cash for what rightfully belongs to T.O. (i.e. the number 81).

I guess it’s a good thing the Bills only signed him to a one-year deal.

UPDATE: Kerfuffle avoided as Owens does indeed get his jersey number. No word on whether or not Hardy will be compensated.