To say I’ve been blessed would be like calling Refrigerator Perry “a bit overweight.”
-Curt Schilling 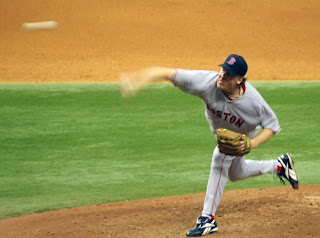 With that, pitcher Curt Schilling announced his retirement from baseball yesterday after 20 seasons in the major leagues.

The things I was allowed to experience, the people I was able to call friends, teammates, mentors, coaches and opponents, the travel, all of it, are far more than anything I ever thought possible in my lifetime.

Four World Series, three World Championships. That there are men with plaques in Cooperstown who never experienced one — and I was able to be on three teams over seven years that won it all — is another “beyond my wildest dreams” set of memories I’ll take with me.

While no one can deny the magnitude of his on-field accomplishments, one of Schilling’s more memorable moments came off the field. I’ll never forget his appearance on ABC’s Good Morning America shortly after the 2004 postseason where Schilling and the Boston Red Sox won the franchise’s first World Series in 86 years. While being introduced by host Charlie Gibson, Schilling chimed in with a reminder about the upcoming Presidential election: "And make sure you tell everybody to vote, and vote Bush next week." A flummoxed Gibson stammered through his next sentence, making for a classic live TV moment!

When you look at Schilling’s career regular season stats (216 wins and 3.46 career ERA), they hardly rival those of some of the great Hall of Fame pitchers. However, was there any other pitcher you’d rather have on the mound in October? In nineteen postseason starts, Schilling was 11-2 with a 2.23 ERA. And he anchored pitching staffs of three different World Series participants.

1993 postseason: In two starts against the juggernaut Atlanta Braves in the National League Championship Series, Schilling, then with the Phillies, was great in two starts. However, thanks to reliever Mitch “Wild Thing” Williams blowing a couple of saves, Schilling did not register a decision but won the LCS MVP award with a sparkling 1.69 ERA. Then with his team trailing the Toronto Blue Jays 3 games to 1 in the World Series, Schilling pitched a five hit shutout in Game 5 to keep the Phils alive. Unfortunately for the Phillies, they ended up losing the series six games.

2001 postseason: After being traded to the Arizona Diamondbacks in mid-2000, Schilling won 22 games the following season in helping the D-Backs win the division. Between the Division series and LCS, he made three starts (all complete games) in leading Arizona to the World Series against a Yankees club who had won three straight Fall Classics and four of the previous five. Undaunted, Schilling pitched seven strong innings in a Game 1 win, setting the tone for a classic seven game battle. Schilling was eventually named co-MVP of the series (along with fellow starter Randy Johnson) as the Arizona Diamondbacks, in only their fourth season of existence, won the World Series.

2004 postseason: Two words: Bloody Sock. With his Boston Red Sox trailing the Yankees 3 games to 2 in the ALCS (they were down 3-0 at one point), Schilling, pitching on a dislocated ankle tendon held down by three sutures put in the day before, went seven gutsy innings in a 4-2 Red Sox win. During the game, the FOX network cameras occasionally panned down to Schilling’s bad ankle showing blood seeping on to his sock. The Sox would also win Game 7, advancing to the World Series where they swept the St Louis Cardinals.

2007 postseason: While Josh Beckett became the ace of the 2007 Red Sox staff, Schilling still came up big when it counted. Trailing the Cleveland Indians 3 games to 2 in the ALCS, the 40-year old Schilling was aided by an 11-run explosion at Fenway Park in a Game Six win. The Sox would move on and complete their second World Series sweep in four seasons, this time against the Colorado Rockies. In what would turn out to be his last career start, Schilling earned the victory in Game 2 of that series.

To me, Schilling’s career is somewhat similar to that of Jack Morris’. Neither pitcher exactly wowed us with gaudy statistics and combined have as many Cy Young awards as I do. But I ask again, could you name five other pitchers you’d rather have start a postseason game? I’ll settle for one.

And that is why I believe Schilling should have his name enshrined in Cooperstown, NY come the Summer of 2013.