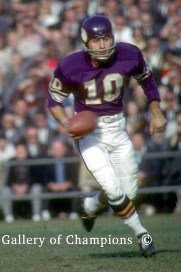 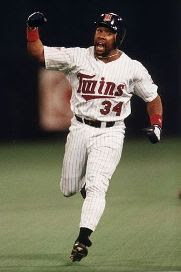 When it comes to Minnesota professional sports lore, two names are inevitably mentioned in a lengthy conversation: Vikings QB Fran Tarkenton and Twins center fielder Kirby Puckett. And I betcha even sports fans outside this state could tell you the jersey numbers donned by these hall of famers.

Upon calling it a career after the 1978 season, Tarkenton had his number 10 retired in a ceremony at the old Metropolitan Stadium in 1979. And we all remember Twins P.A. announcer Bob Casey bellowing out “NUMBER THIRTY FOUR….THE CENTERFIELDER KIRBEEEEEEEEEE PUCKETT” whenever Puckett came to bat. But due to Kirby’s premature retirement in 1996, no one will ever wear the number 34 again.

Now, here’s a bit of trivia for you. Only one other player ever wore the number 10 for the Minnesota Vikings. And the year 1982 would have been the last time a player other than Kirby Puckett ever wore jersey number 34. 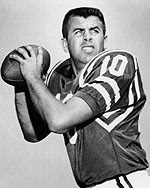 Tarkenton was drafted in the third round by the expansion Vikings in 1961. But after six seasons in Minnesota, he was traded to the New York Giants where he spent the next five years of his career. In 1968, the Vikings signed veteran King Hill (pictured above) as a backup QB. Even though Hill never threw a pass that season he does own the distinction of being the only other Viking player in team history to wear number 10. 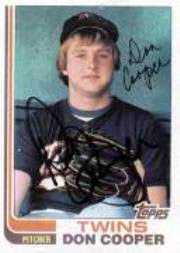 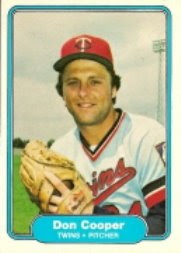 In the early 80s, pitcher Don Cooper (currently the pitching coach for the Chicago White Sox) made 33 appearances (three starts) as a member of the Minnesota Twins. His stats were not very noteworthy as he compiled a mere 1-5 record with a 5.15 ERA. However, Cooper was the last Twins player before Puckett to ever be announced as number 34. And it’s highly unlikely he ever received a unique greeting from Casey when he entered a ball game in relief.

So there you have it. More useless sports trivia which you can use to win a bar bet!