- Since Donald Trump officially became the GOP nominee for President, I have never wavered from my belief that Hillary Clinton will defeat him in this November's election. This is in spite of the debacles surrounding her Secretary of State email, ethical questions regarding the Clinton Foundation, etc.

Now the Democrat National Committee and her campaign must address another persistent issue: her health.

Democratic operatives predicted an "emergency DNC meeting" to "CONSIDER replacement," following Democrat nominee Hillary Clinton's collapse at the 9/11 memorial event on Sunday, according to a broadcast journalist on Twitter.

David Shuster, a former anchor for Al Jazeera America and MSNBC, revealed the bombshell news Sunday afternoon, tweeting that operatives in Clinton's party expect a meeting to discuss whether or not to replace their nominee.


According to Shuster, a Democrat operative described Clinton's recent stumbles — literally and figuratively — as "uncharted political territory." The operative listed Clinton's infamous "basket of deplorables" comment, her hiding pneumonia for 3 days (if indeed she has pneumonia), and the video of her fainting after the 9/11 memorial ceremony. On Sunday, Clinton also called off her trip to California, scheduled for Monday and Tuesday.


I remain skeptical that there will be serious discussions to replace Mrs. Clinton as the candidate. But on the off chance that the subject is indeed broached........ 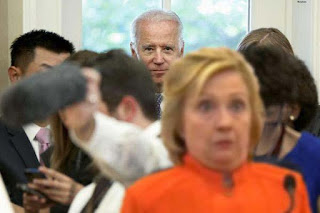 - In 56 years of Minnesota Twins baseball, only nine times has a player hit at least 40 home runs in a single season. The only time such a feat was accomplished by someone other than Harmon Killebrew? That would be this disaster of a 2016 season, as second baseman Brian Dozier hit his 40th homer Monday evening in a (surprise!) loss to the Detroit Tigers.

To summarize: In 2016, the Twins are likely to eclipse the franchise record for most losses the same year they have a player who set the single season home run record for a second baseman.

- The Minnesota Democrat party chair's attempt to suppress GOP votes lawsuit against the MN Secretary of State rightfully gets tossed.

Republican Donald Trump will remain as an option for Minnesota voters, the state Supreme Court ruled on Monday.

Wholly dismissing the Minnesota Democratic-Farmer-Labor Party’s petition to remove Trump from Minnesota ballots, the court said the time remaining before the Nov. 8 general election is too tight to strike the Republican and still conduct an orderly election. The court’s decision was quick: The DFL had filed its petition five days earlier.

The court appeared to give particular weight to information from the Minnesota secretary of state: At least 1 million general election ballots have already been printed and the absentee voting period begins Sept. 23.

The decision shores up the conclusion most experts already reached: The chances the high court would deny a major political party — and voters — their pick for the presidential election were slim. To comply with Democrats’ wishes, the state would have had to replace not only printed ballots but also those already mailed out — and, likely, see its court’s decision questioned in the highest quarters.


If the MNGOP selection of alternate electors was as egregious an offense as DFL chair Ken Martin conveyed, why did he wait nearly two weeks to file this lawsuit given that early voting begins in September? As I wrote last week, it's highly unlikely GOP electors will even be a factor this election cycle, to say nothing of the alternates.

In the end, the SCOM didn't even address the substance of the lawsuit.

While the court rejected the DFL’s contention that Trump should be removed from the ballot, its order did not deal with the substance of the Democrats’ complaint.

The DFL had complained that Secretary of State Steve Simon improperly added Trump’s name to the ballot because Republicans did not properly nominate their alternate electors. Electors are the people who actually cast Minnesota’s 10 Electoral College votes.


So if Martin's seemingly frivolous lawsuit was not a blatant attempt to suppress Republican votes, what would he have done differently had his intention been to disenfranchise voters?

well, there is always lying about the opponent and election fraud.