- There's a belief among some Donald Trump for President supporters that Trump's alleged appeal to "non-traditional" Republican voters will result in some states which are normally not competitive in a presidential election to suddenly become "in play."

Erick Erickson has long been skeptical of this, but has now apparently seen the light.

{I}n fact, Trump and his supporters are right. Donald Trump will put states in play for the GOP that have never been in play before.

Utah, the most Republican of all the Republican states, would go to Hillary Clinton according to new polling. If Trump is the nominee, the state that has always voted for a Republican Presidential nominee will suddenly go Democrat.

Trump and his supporters are right! They do put states in play that have never been put in play before.

By the way, New York, New Jersey, Michigan, and Pennsylvania all still go to Hillary, according to the polling.


Trump himself continually says he leads Clinton in most head-to-head polls and is also ginning up broader support than any other GOP presidential candidate in recent history. However, neither of those claims have any basis in reality. Kind of a microcosm of his whole campaign, eh?


- If there was ever any doubt that sports media is any less bias than regular news media, just check out these two tweets from perhaps the two most influential sports news outlets.


Within the SI story, the author also put scare quotes around the phrase "religious liberty." Nope, no ideological slant there. 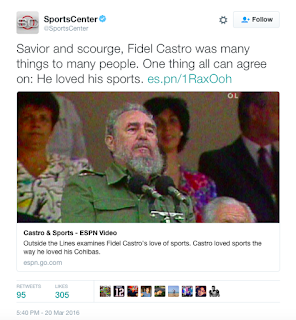 Always ones to display courage, ESPN ended up deleting that tweet.


- Speaking of Cuba, President Barack Obama landed there Sunday, marking the first U.S. President to visit that country in nearly 90 years. The visit has been labeled as one where Obama hope to improve ties between the U.S. and Cuba.

Let's just hope our typically tone deaf president focuses more on the economic plight of the Cuban people as well as their lack of freedom and liberty as opposed to lecturing the country on LGBT issues as he is wont to do.