The second most points of any American born NHL player.

Those accomplishments alone would suggest that the owner of those records would be in the Hockey Hall of Fame. Well, it took longer than it should have but the official announcement came Monday.

The routine repeated itself every summer, around the time when Phil Housley knew the Hockey Hall of Fame was about to announce its newest inductees. The South St. Paul native and 21-year NHL veteran would wait by his phone, hoping to get the news that he had been elected.

Year after year, Housley was disappointed, leading him to wonder if it was ever going to happen. That explained the flood of emotions he felt Monday, when he finally got the call to the Hall with four other players and two men elected in the builder category. The highest-scoring American-born defenseman in NHL history said he was “shocked, excited and extremely proud” to enter the Hockey Hall of Fame 12 years after his retirement, a memorable conclusion to a long wait.

Housley, 51, is the oldest of the players who will be inducted in a ceremony on Nov. 9 at the Hall of Fame in Toronto.

Phil's wife Karin captured his reaction upon receiving the call.


While I've gotten to know Karin pretty well over the past few years, I have only met Phil on one occasion, which was his wife's 50th birthday celebration 17 months ago. 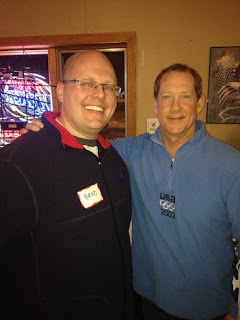 Yes, 2015 is shaping up to be quite a memorable year for the Housleys. Not only is Phil entering the Hall of Fame, he and Karin celebrated 30 years of marriage in mid June and they will be first time grandparents this fall! I am absolutely sincere when I say that such blessings couldn't be happening to a much classier couple.