Walking away a winner!

As it became pretty apparent that Walker was going to emerge victorious, the leftist spin machine all of sudden was outraged, OUTRAGED I tellz ya, at the tremendous amount of money an incumbent Governor was able to raise, especially from out of state. Once again, my friend and Northern Alliance Radio Network colleague Mitch Berg had leftists pinned perfectly when conveying "Berg's Seventh Law" several years ago:

" When a Liberal issues a group defamation or assault on conservatives’ ethics, character or respect for liberty or the truth, they are at best projecting, and at worst drawing attention away from their own misdeeds."

By the way, do you recall this logo put which was designed by the union allies? 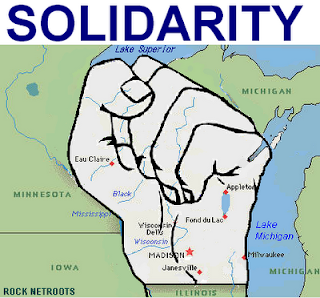 I'm in need of a capable graphic artist who can re-design the fist playing the sad trombone.