- Eric and Andrew Dayton, sons of MN Governor Mark Dayton, have stepped up their efforts to defeat the Minnesota Marriage Amendment which will be on the ballot this November.

Minnesotans United for All Families, a group urging a no vote on the amendment, says that through June 12, the two Dayton brothers will match donations to the group's campaign, up to $200,000.

In an email, the brothers wrote: "It's simple: Committed, same-sex couples should have the freedom to marry. Together, we can contribute $400,000 toward Minnesotans United's  efforts to protect that freedom."

Regardless of what one thinks of this amendment (I'm still undecided myself), I find rather tedious the publicity stunt of "we'll match every dollar up to {name the amount}." If the Dayton brothers are as adamantly opposed to the Marriage Amendment as they convey, then donate the entire $200K up front and challenge other amendment opponents to cumulatively match that number by Monday's deadline. Personally I believe the "telethon" approach is much more effective.

Amanda Bynes is calling the officer who arrested her on suspicion of driving under the influence a big fat liar. And she's turning to the highest authority she can think of to help her right this grave injustice.

"Hey @BarackObama… I don't drink," the 26-year-old actress tweeted Tuesday, pleading with the leader-in-chief to "Please fire the cop who arrested me."

Oh, Amanda. You're going about this all wrong. You should have told the President that the arresting officer balked at paying for your birth control. That would have earned you a personal phone call.


- I've said it before and I'll say it again: In a perfect world the residents of MN Congressional District Four would wake up on Election Day and proclaim "Wow, Betty McCollum is a lousy representative. Time to vote for the Republican candidate this time around."

Ah, but in a perfect world, Betty wouldn't have been elected in the first place. But I digress.

Once again CD4 Republicans have endorsed a fine candidate in Tony Hernandez to oppose Rep. McCollum this election cycle. 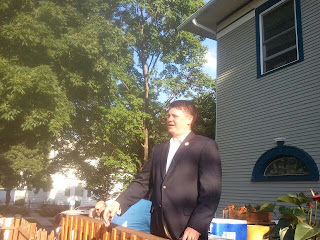 Tony Hernandez speaking at a fundraiser in the backyard of his childhood home in St. Paul

Since Ms. McCollum will likely raise close to $1 million for her 2012 campaign, it would be understatement to say that Hernandez's task is somewhat daunting. But in the immortal words of Abraham Lincoln "The probability that we may fail in the struggle ought not to deter us from the support of a cause we believe to be just."

Since I live in the reddest Congressional District in the state of Minnesota (the Sixth), I don't mind telling you that I have diverted some of my financial resources for the cause. In fact, if any of you reading this live in the 2nd, 3rd or the 6th, your incumbent member of the US House will win reelection rather handily. With that in mind, click here and help out Tony today!

Be part of a just cause by returning Betty McCollum to the private sector (or whatever she did before she warmed a seat in Congress).