From Silver to Gold

About ten months ago, I shared the story of Frank Sanders, a Godly man whom I've known for more than twenty years.

Frank was diagnosed with pancreatic cancer in January and was given approximately six months to live. Here it is ten months later, and Frank is still with us, though not in the best of health. While he continues to preach when he can at the Woodbury church where he is pastor, Frank is often hampered by the side effects of his illness, thus rendering him the uncomfortable role as spectator.

For now, Frank's family is comforted by the fact the God's perfect will shall be obtained. Either Frank will receive miraculous healing and continue to live on this earth for several more years or he will be called home to be with his Heavenly Father, a place where he'll be made whole once again and have no more physical pain.

Frank's life, eschewing the fortune and fame of a professional hockey player to honor the call to join the ministry, in and of itself is one for the storybooks. In fact, I recently obtained my copy of From Silver to Gold: One Man's Pursuit of the Ultimate Prize, which details Frank's remarkable transformation. 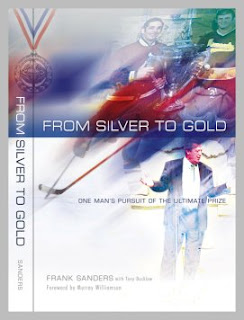 While there's a possibility that Frank's remaining time on this earth may be short, he has ensured his inspirational story of unshakable faith will endure forever.

Email ThisBlogThis!Share to TwitterShare to FacebookShare to Pinterest
Labels: Christianity, Friends, Heroes of the faith