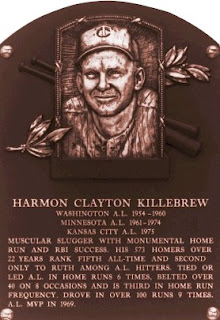 It is with profound sadness that I share with you that my continued battle with esophageal cancer is coming to an end. With the continued love and support of my wife, Nita, I have exhausted all options with respect to controlling this awful disease. My illness has progressed beyond my doctors' expectation of cure.

I have spent the past decade of my life promoting hospice care and educating people on its benefits. I am very comfortable taking this next step and experiencing the compassionate care that hospice provides.

I am comforted by the fact that I am surrounded by my family and friends. I thank you for the outpouring of concern, prayers and encouragement that you have shown me. I look forward to spending my final days in comfort and peace with Nita by my side.
-Harmon Killebrew, MLB Hall of Famer

Yes, it appears that Killebrew will enter the twilight of his life in much the same way as he lived it: with grace and humility. Granted, I have never met Harmon. But reading the testimonials from those who were close to him and knew him well, the statement he released yesterday epitomizes the dignity with which he has always carried himself.

My earliest recollection of Twins baseball was 1979, about three years after Killebrew retired. But in 1984, when it was announced that the man called "Killer" would enter the baseball Hall of Fame, I attended Harmon Killebrew night in a May game at the Metrodome (I'm sure I have the commemorative Harmon Killebrew tin can around here someplace). While an average Twins team was drawing maybe 15,000 fans per game, nearly 40,000 came out to pay homage to the greatest slugger in Twins history, who hit 573 home runs in his career (well before the steroid epidemic).

To this day, Harmon's legacy still resonates throughout Twins Territory. If there was any question of how much Killer is beloved, you needn't look any further than the utter devastation expressed by Twins players, coaches and management upon yesterday's news. In fact, the Twins players have universally agreed to honor Killebrew by donning the creme colored 1961 jerseys for all their remaining home games this season.

Now let's hope the Twins give an even greater salute to Killer by actually showing a semblance of offensive prowess.