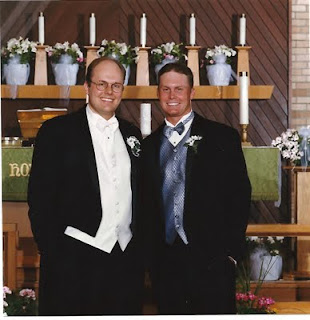 The best Best Man a guy can have

When I was planning on getting married in the Summer of 2000, there was no question that my brother Eric was going to be my best man. Upon asking him, he was very hesitant to accept. It wasn't that he didn't feel it was a tremendous honor, as much as the fact he wasn't comfortable with the responsibility which came with it. The biggest source of trepidation was the best man toast at the reception. Many people would literally rather die then have to give a speech in front of a room full of people. But that wasn't the case with Eric. No, he'd prefer to be thrown into a pit with every carnivorous member of the reptile family as opposed to public speaking.

Nevertheless, he agreed to fulfill his brotherly duty. As the wedding day arrived, he fretted every minute of that day leading up to his big moment. I don't recall what he said the first few minutes but it was his closing remarks which I'll always remember.

"I've watched Brad really mature over the years and I don't hesitate to say I wanna be just like him. So when I go home tonight I'm going to shave my head and put on forty pounds."

Yes, despite being a ball of nerves, Eric managed to display that biting humor we've all grown to love. So it's an absolute privilege to be able to wish a very happy 40th birthday to my younger brother (wow, that's hard to fathom) as well as someone who's become a good friend and confidant over the past few years. We may have gotten along about as well as two cats in a burlap sack when we were kids, but I'm grateful we're buddies now.

Email ThisBlogThis!Share to TwitterShare to FacebookShare to Pinterest
Labels: Family