A Fair to Remember, Part 3.

One of the final stops on our 11-hour excursion at the fair was a visit to the radio show of Minnesota’s Mr. Right,(Oops! Sorry, that’s the intellectual property of Hubbard Broadcasting) Jason Lewis at FM 100.3 KTLK. 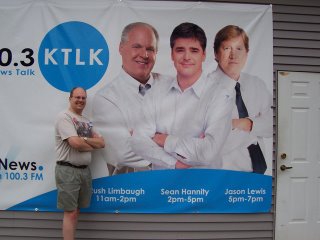 The 5:00 hour of the program featured a debate between the candidates for the Second Congressional district of Minnesota, Incumbent John Kline and challenger Coleen Rowley. You may know Rowley as the former FBI employee who “blew the whistle” on the bureau’s alleged ineptitude in handling warnings of the 9/11/01 terrorist attacks. 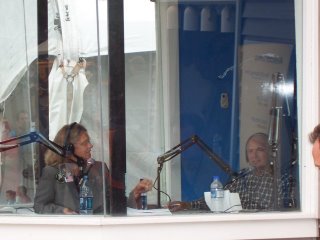 Upon arriving at the KTLK booth prior to the debate, my wife & I were greeted by a smiling woman in a gray pants suit. This woman seemed very glad to see us until she noticed “Kennedy for Senate” buttons pinned to our shirts. It was Ms. Rowley herself, who initially expressed joy when she mistakenly thought we were wearing her campaign attire. Nonetheless, in an attempt to adapt to her new role of schmoozing politician, she conveyed her thoughts on issues she felt most important.

She really lost me when she felt the McCain-Feingold Act wasn’t stringent enough. This was a law intending to reform campaign financing. One of the major provisions is to ban “non-partisan ‘issue ads’ funded by soft money from corporations and labor unions - those referring to candidates for federal election without expressly advocating their election or defeat -- in the 60 days prior to a general election, or 30 days prior to a primary election.”

So a piece of legislation which is a direct assault on the First amendment is, in the mind of Rowley, “not strict enough”?

Best of luck with that one, Coleen.

It appears John Kline is headed back to Washington.
Posted by Brad Carlson at 12:31 AM