Quick Hits: Volume CLXXIX (UPDATE: I fell for it)

- I'm certain many of you have read (or have at least heard about) the New Year's Day WaPo op-ed where Mitt Romney was highly critical of President Trump. The president then replied via Twitter. 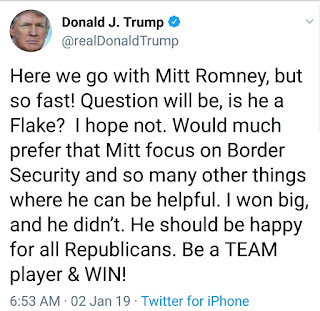 I've made it known several times that I would've preferred Romney had emerged victorious in the 2012 presidential race and thus we would have been spared Trump in 2016. And I also find it difficult to disagree with much of the criticisms he levied towards Trump's character in the aforementioned op-ed. But why just days ahead of being sworn in as a U.S. senator out of Utah is Romney re-litigating these old issues? Is this a preemptive strike towards a 2020 GOP primary challenge to Trump? Is Romney still bitter over not being chosen as Trump's Secretary of State? Did he feel he could shame the president into acting with more decorum going forward?

I'd like to think this is little more than high profile venting and thus he won't morph into another edition of John McCain, Bob Corker or Jeff Flake. Sadly, it's likely that I'm being too optimistic with that assessment.


- It appears some in the "thought police" are going to be even more insufferable in 2019. 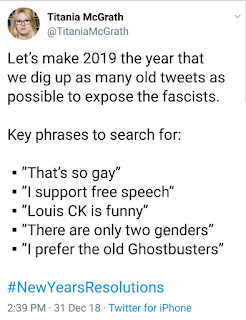 Of the many amusing aspects of this tweet, perhaps the most uproarious is how she this person uses the term "fascists" without a hint of irony.

UPDATE: Yep, I fell for it. This is a parody account, and a brilliant one at that.


- I'm confused by a lot of "progressive" logic, not the least of which who is allowed to convey partisan opinions.

From what I can gather from progs, if one is a member of the U.S. Supreme Court (a part of the supposed independent judiciary branch of government) and espouses views which are critical of President Trump or diametrically opposed to Trump's opinions (i.e. Ruth Bader Ginsburg and Chief Justice John Roberts), it's all good. But if the spouse of a SCOTUS justice speaks out? Controversial!

Ginni Thomas, the wife of Supreme Court Justice Clarence Thomas, has generated controversy with her use of of social media to spread far-right rhetoric.

CNN and The Washington Post published separate reports in recent days highlighting Thomas's use of social media. She has in recent months shared posts on Facebook alleging Democrats committed voter fraud, claiming survivors of a mass shooting at a Parkland, Fla., high school are a threat to the country, and that Rep. Jim Jordan (R-Ohio) was the subject of "false accusations" because he "threatens the elite."

The Post reported that Thomas's spread of baseless claims and conservative commentary has generated criticism from some who worry she is further politicizing the Supreme Court.

Um, how is she further politicizing the Court? SHE'S NOT A SITTING JUSTICE! Her opinions have zero impact on rulings made by SCOTUS

Ah, but let's not pretend we don't know what this is all about. The crux of the matter is Mrs. Thomas's views aren't aligned with the voter bloc (i.e. women) which the left feels should be in lockstep with their ideology. And the fact she's married to a black man who many perceive leans to the right politically? Exponentially outrageous.

I wondered that myself. Even did a few Google searches to verify. Wasn't able to determine anything definitive, but it appears many leftists are on board with what she believes.