Twitter user @KNayyeh speculated on how the two could team up for an even bigger cause. 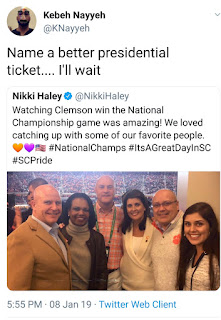 Can you even imagine if a Haley-Rice ticket came to fruition in, say, 2024? How amazing would it be to watch in real time how the sacred concept of "intersectionality" would no longer be the Dems' top prioirty, particularly if a lily white male Biden-O'Rourke ticket emerged as the opposition?