- GOP endorsed US Senate candidate Mike McFadden knows full well the monumental task he has ahead in attempting to oust Minnesota senator Al Franken. However, the latest polls indicate that McFadden is indeed within striking distance with approximately 4-1/2 months until election day. And some prominent news stories this past weekend offered up some substantive talking points for the McFadden camp to really glom on to.

One being that Cristo Rey Jesuit High School in Minneapolis graduated 100% of its senior class, with all those students having been accepted into college. McFadden has served on the board at Cristo Rey for the past few years. Think he has some insight on educational issues and what works?

The other noteworthy item was the stunning news of medical device giant Medtronic purchasing Covidien for $42.9 billion and then planning to move its corporate headquarters out of the Twin Cities to Ireland. Not only does this have to do with the significant corporate tax rate corporations face in the U.S., but also the excise tax on actual medical devices has to factor in. The excise tax was part of Obamacare, for which Franken became the 60th filibuster-proof vote. Franken had a chance to make this right last fall when an amendment to repeal said tax was brought forth as part of a Continuing Resolution. Minnesota's junior senator voted "no."

No sense for the McFadden camp to leave anything on the table at this point.


- It was 20 years ago today when alleged murderer O.J. Simpson was hiding in the back of pal Al Cowlings' white Ford Bronco, leading police on a miles long chase along a southern California freeway.

Earlier that day, Simpson lawyers Robert Shapiro and Robert Kardashian held a press conference responding to their client being charged with murders of his ex wife Nicole Brown Simpson and her friend Ronald Goldman. Kardashian then read a letter penned by Simpson, a letter which sounded more like a suicide note.

As I look back, two awful things were introduced into our culture that fateful Friday evening: One, the ultimate reality television experience. And two, the name "Kardashian" was first heard by the masses. It's been a steady cultural decline ever since.


- I admittedly let out an audible gasp yesterday upon learning of the death of a baseball legend.

Tony Gwynn, who banged out 3,141 hits during a Hall of Fame career spanning 20 seasons with the San Diego Padres, has died of cancer at age 54, it was announced Monday.

He died early Monday morning at Pomerado Hospital in Poway, California, while surrounded by his family, the Baseball Hall of Fame announced.

"Major League Baseball today mourns the tragic loss of Tony Gwynn," commissioner Bud Selig said in a statement Monday. "The greatest Padre ever and one of the most accomplished hitters that our game has ever known, whose all-around excellence on the field was surpassed by his exuberant personality and genial disposition in life.

"... For more than 30 years, Tony Gwynn was a source of universal goodwill in the National Pastime, and he will be deeply missed by the many people he touched." 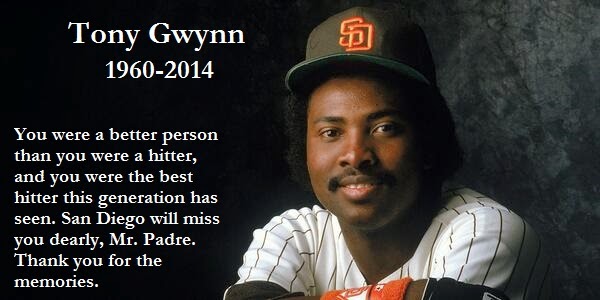 Perhaps one of the more masterful handlers of a bat since Ted Williams, Gwynn hit at least .300 for 18 consecutive seasons (1983-2000), usurped only by the 23 straight years achieved by some guy named Ty Cobb. So prolific a hitter was Gwynn that he and Pete Rose were the only players in MLB history to lead the league in hits 14 seasons apart.

One of the bigger buzzkills of the 1994 players' strike (obviously outside of the postseason being cancelled) was the fact Gwynn had a legitimate shot to hit .400, something that had not been done since Williams in 1941 (Gwynn finished that shortened season hitting .394).

Despite those other-worldly stats, Gwynn never desired to get his big pay day as he always opted to stay in San Diego. As salaries really began to escalate in the late 1980s into the early '90s, Gwynn typically wasn't making half of what the highest paid player in MLB was earning at the time. He desperately wanted to bring a World Series title to San Diego, but his club fell short in both the 1984 and 1998 Fall Classics.

For those who are stats geeks like myself, check out the column of ESPN's Jayson Stark as he dissects Gwynn's incredible run. And for an insightful look at the class exuded by Gwynn, Buster Olney offers up a wonderful retrospective.