The story of abortion doctor Kermit Gosnell can be summed up in one photo: 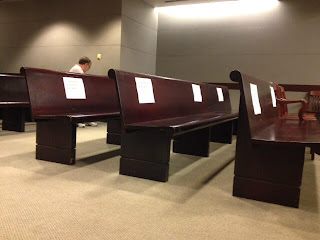 That is the seating area for members of the media covering the trial of Gosnell, the Philadelphia area who physician who has been charged with eight counts of murder (seven newborns and one adult female).

It would appear the leftist mainstream media is loathe to cover such a story, and one could conceivably boil it down to three reasons. Mr. Gosnell is 1) an abortionist (aka staunchly "pro choice"), 2) a Democrat and 3) a minority. In addition, if there is adequate reporting on the horrors of "aborting" fetuses born alive after a failed in-womb abortion, this could potentially put President Barack Obama in an unfavorable light. Remember, as an Illinois State Senator, Obama voted against proposed legislation that would have mandated medical care to fetuses surviving in abortion. For a politician so prolific in voting "present" on so many issues, this "no" vote leave little to interpret on Obama's radical pro choice beliefs.

Only because of alternative sources such as right wing blogs, social media, online conservative talk shows, etc., has this story been able to reach the masses. Only as a result of shaming several media empires have the members of the MSM vowed to commit more resources to it.

If you think about it, the MSM's behavior during this Gosnell saga is not all that different from their woeful coverage (and dare I say complicity) in the misstatements of the Benghazi incident. When it was pretty much obvious to anyone with a half a brain that the attack on the US Consulate in Benghazi, Libya was not in response to an anti-Islam video, but rather an Al-Qaeda terrorist attack, many in the media seemingly dropped the coverage or did little to no followup. Again, one could deduce the reasoning for such a lack of media curiosity being that a terrorist attack flies in the fact of an Obama narrative. More specifically, their one major foreign policy achievement, the capture and killing of AQ leader Osama bin Laden, essentially crippled that terrorist organization. Once again, if most of the media performed their due diligence and discovered so close to the Presidential election that Al-Qaeda being severely weakened was indeed not the case, how eager would they have been to report such a thing?

As we've seen over the past 20-30 years, far too many journalists seem to have a warped perspective of their role in society.