Before I reveal my prediction for the 2012 presidential race, I think it's important that you know I try to be a very logical person while maintaining a sense of optimism. I do pride myself on being an optimist, but not to the point of being delusional. For example, I pretty much resigned myself to the fact that Barack Obama would defeat John McCain in the 2008 Presidential race. I believe I called it for Obama 338 electoral votes to 200 for McCain. Obama ended up prevailing 365-173, as I missed on one Congressional District in Nebraska (went for Obama) as well as the states of Indiana and North Carolina (predicted McCain; both went Obama).

The difference this time around is there is legitimate hope that the Republican candidate, Mitt Romney, can prevail this election cycle. At first it didn't look good as Romney consistently trailed the President in every conceivable poll once he became the official GOP nominee in late August.

Then the first debate happened in early October, where Romney soundly defeated a seemingly deferential and weary President Obama.

All of a sudden many people who were rather apathetic about this election (or self-described anti-Obama) suddenly became enthusiastic about Romney's candidacy (naming Paul Ryan to the ticket in August was a positive first step).

Recently I broke down Romney's path to 270 electoral votes. The way the polls have swung over the past month, I see a very plausible path to 261. However, without winning the state of Ohio, said path quickly becomes narrow. While I'm ripe for a surprise in seeing a Romney win in Ohio (18 EV, which would give him the win at 279) or Wisconsin (10, for a total of 271) he's never had a lead of any kind in either state. Although Iowa is suddenly looking feasible, the six electoral votes possibly gained there would get Romney to only 267.

With that in mind, here is my official prediction for the 2012 Presidential race: 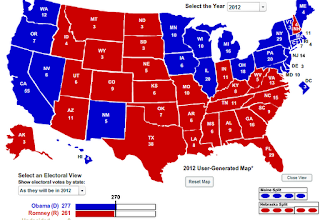 As you can probably surmise, I desperately hope I'm wrong and that somehow Romney can flip Ohio, Wisconsin, Michigan or Pennsylvania.

I know I'll be paying rapt attention Tuesday night (possibly into Wednesday morning) until one of the candidates hits 270.

Email ThisBlogThis!Share to TwitterShare to FacebookShare to Pinterest
Labels: Election '12