After several excursions to various sports bars last year to show off my knowledge on NFL trivia, I made by 2012 debut last evening at Champps in Maplewood!

The local ESPN radio affiliate (along with Coors Light) put on the event with sports guys Tom Pelissero and Phil Mackey as MCs.

The first round entails answering 10 questions conveyed by the guys. Since some questions have multiple answers, there was 19 total points available in this round. From there, the top sixteen scores advance to the tournament bracket. Having earned 17 of a possible 19 points, I drew the #3 seed and a first round bye (there were only ten participants).

In the quarterfinals, I faced a duo that called themselves "Bucky" since they were donning Badger red. This round was a best two of three.

First question: How many AFC teams currently have a winning record?


Next question: Kevin Kolb has started the past five games at QB for the Arizona Cardinals. Prior to coming to Arizona.....

Final question to move on to the semifinals.

For what other franchise did Don Shula serve as head coach prior to the Miami Dolphins?

Brad (buzzing in a split second before Bucky): Baltimore Colts. Correct!! Brad moves on to the semis.

It was in the semis where I faced the Rain Man of NFL Thursday night trivia, Brendan Byrne. Brendan won the ultimate prize ($100) 10 times last year and had both weeks thus far this season.

In the semis, it's also 2 out of 3, but the questions have multiple answers and are answered alternately by the contestants until someone gets it wrong.


Question 1: Name the player selected with the #1 overall pick in the NFL draft over the past 11 seasons.

D'OH!!! I remembered a few seconds later that the San Diego Chargers did indeed pick #1 overall in 2004, the year Rivers was drafted. However, the Chargers drafted Eli Manning with the top pick and then traded him to the NY Giants for Rivers (whom the Giants selected at #4) and draft picks.

Question 2: Name the players who have appeared on the cover of Madden NFL since 2000.

Brendan moves on to the Finals.

Did I also mention that this event is sponsored by Coors Light? Such sponsorship comes with more perks than just lower prices of the beer. 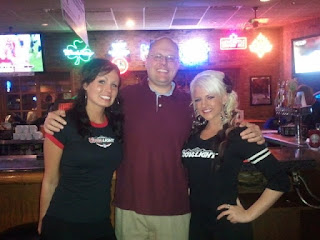 Yes, I got over my defeat rather quickly.