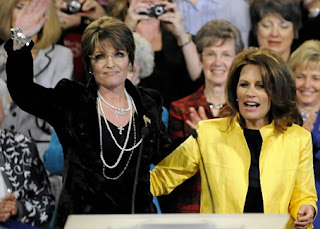 Within the next week or two, Congresswoman Michele Bachmann (R-MN) is expected to make official her bid to seek the GOP nomination for the 2012 Presidential race. Former Alaska Governor Sarah Palin has yet to even form an exploratory committee, so whether or not she'll make her own White House bid is still very much up in the air.

Since many consider Bachmann and Palin interchangeable in terms of their ideology, there has been much speculation as to whether the two could remain civil if both were vying for the same prize. Personally, I didn't feel that would be an issue since both seem to be unified in their passion to restore fiscal sanity to this country (not to mention the fact that they're pals). I guess that's why I found it rather curious when Tammy Bruce "tweeted" the following a couple of weeks ago:

Bachmann says she considers Palin a friend. Which explains her stalwart support of her during Tucson accusations. Oh, wait...

To be honest, I'm not 100% certain what Bruce was implying there. I got a sense she was insinuating that Bachmann was positioning herself for a legitimate Presidential bid and thus didn't want to give any positive vibes towards Palin, who would be a formidable opponent for the GOP nomination. So is that why Bachmann didn't defend Palin from those scurrilous attacks in aftermath of the Tucson shootings? That seems a bit far fetched. But I guess one could conjure up scores of reasons why people choose to remain silent in a scenario where their input may or may not be relevant.

Fast forward to this week where many are legitimately wondering about Bachmann's deafening silence on the heels of a campaign staffer's criticism of Palin.

"Sarah has not been serious over the last couple of years," Rollins said. "She got the vice presidential thing handed to her. She didn't go to work in the sense of trying to gain more substance. She gave up her governorship."

Bachmann, he said, is the more established GOP candidate; he called her the 2012 field's "best communicator" since Mike Huckabee decided to skip the race.

"Michele Bachmann and others [have] worked hard, she has been a leader of the tea party, which is a very important element here," he said. "She has been an attorney. She has done important things with family values."

There is no question that Bachmann will be asked about Rollins' comments. I'm curious to hear how she'll respond, specifically whether or not she endorses his viewpoint.

My feeling all along has been that Palin will not run for the simple reason that she makes so much money doing what she's doing (i.e. speaking circuit, writing books, etc.). But make no mistake that she is still very influential amongst the Tea Party movement and thus would prove to be a valuable fund raiser to any candidate who receives Palin's endorsement. Bachmann would be wise not to burn bridges so early on.

dont be so sure that the two women would have near identical voting records.
palin has said repeatedly she is just like john mccain, while bachman attempts to portray a patrick buchanan in drag.

palin has had to govern, and not very long. so we really do not know how she would do on the social/moral issues. she is pro-life, she claims, but that doesnt really mean much... she's offered that there is wiggle room in her psoition. in short, i would not count on her to cast the deciding vote to ban abortion outright.

bachman, otoh... votes without consequence. she can afford to take the hard line positions becuase she wont have to live with them, and also... if she did not her icon status would diminish. she's more about political branding as a carreer path.

I've always felt Bachmann's candidacy was more to use the Presidential candidate's platform to convey her policy stances rather than actually winning the GOP nomination.

I live in Bachmann's district and the highest percentage of the vote she ever received was 53%, which happened in 2010, a big year for the GOP. However, Presidential candidates seem to fair much better. Bush got 57% in 2004 whereas in 2008, McCain (in still a down year for Republicans) garnered 53% (Bachmann barely got over 50%). My point here is that she has unusually high negatives in what is a pretty conservative district. I just don't see how that can translate to big success nationally.

he won by a few points every year, in a district where neither party had the majority, but democrats outnumbered the GOP.

but, to his credit, he was a true reprsentative, who went to bat for folks in his district, even groups and businessmen who opposed him. he was known among his peers as the best when it came to constituent service.