Glad he's on my side 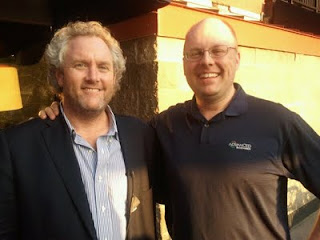 Andrew Breitbart and myself at Brit's Pub in Downtown Minneapolis

If we were playing that good ol' fashioned word association game, that is the one word I would regurgitate in response to "Andrew Breitbart."

Prior to his Herculean efforts in breaking the Congressman Anthony Weiner "wiener" story, Breitbart gained a lot of notoriety by challenging the slanderers of the Tea Party movement. In March of last year, Breitbart offered a $100,000 reward to anyone who could produce conclusive audio and/or visual evidence of Tea Party members hurling racial slurs towards members of the Congressional Black Caucus, as had been claimed. Fifteen months later, that $100K still burns a hole in Breibart's pocket.

Because he is a conservative and because he breaks some of the more gargantuan news stories with a fraction of the Mainstream Media's resources, Breitbart is universally reviled by leftist politicians and their supporters. And because they can't criticize Breitbart on merit, the ad hominem attacks are at a fever pitch. In fact, Breitbart himself will publish some of the more vile "tweets" he receives via his Twitter feed.

When Breitbart broke the Weiner story Memorial Day weekend, the New York Congressman (when he finally addressed the issue publicly) claimed he was the victim of a prank and that his Twitter account was "hacked." With that, some folks in the MSM speculated that Breitbart may have been the "hacker" and essentially accused him of framing Weiner. Once again, Breitbart met the challenge head on. Since hacking into someone's private online accounts (i.e. e-mail, Facebook, Twitter, etc.) is a crime, Breitbart called for a criminal investigation to catch the "hacker", which would also serve the purpose of clearing his name.

It all culminated this past Monday afternoon as Weiner publicly admitted to several online affairs (aka "sexting") with women, including the picture which started it all. That photo to which I'm referring of course is the one of a....ahem...."turned on" male in a pair of briefs.

Coincidentally, Breitbart happened to be in New York Monday when it was announced Congressman Weiner was going to hold a press conference. In true Breitbart fashion, he upstaged his main detractor (in this case, Weiner) by holding his own impromptu address.

A downtrodden Weiner later came on to apologize to everyone (including Andrew Breitbart) for his handling of this whole situation as well as for the lewd conduct itself. As such, I'm sure Congressman Weiner's supporters will forgive him for his conduct. As far as forgiving him for apologizing to Breitbart? Maybe not so much.