In December 2004, my wife and I had the privilege of visiting the World War II memorial in Washington, DC. 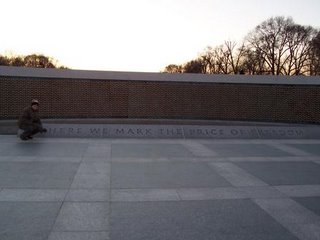 A simple phrase of “HERE WE MARK THE PRICE OF FREEDOM” is etched in stone in front of a wall of 4,000 gold stars. Each star represents approximately 100 soldiers killed in action. Think about that! 400,000 soldiers lost their lives in an effort to preserve the precious liberty we have enjoyed for over sixty years!

As other members of our greatest generation pass on, so too do their memories of courage and sacrifice. Given the fact that their bravery has allowed us to live in the greatest country in the world for so long, many citizens today don’t understand what went in to establishing the freedoms and liberties we currently enjoy.

So on this 65th anniversary of the bombing of Pearl Harbor, my prayer is that the sacrifices made by our American military will never be in vain.

Like the generation of WWII, may we never lose our passion in preserving freedom.
Posted by Brad Carlson at 12:14 PM