The Gift of Life.

Everson Walls played twelve seasons as a cornerback in the National Football League. You don’t last that long in the NFL without having some talent.

However, Walls seems best known for his futile attempt in defending San Francisco 49ers WR Dwight Clark. In the 1981 NFC Championship game, Walls (a rookie), is part of a memorable photo from a most memorable game. 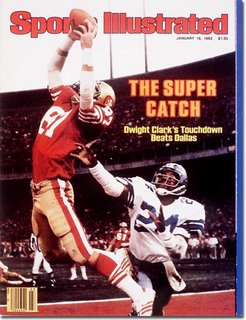 Clark’s sensational catch with less than one minute to go gave the 49ers a 28-27 victory and a berth in the Super Bowl.

Walls has had to endure the stigma of being the victim of “The Catch” for about 25 years.

I would guess from this day forward he will be thought of in a much more heroic sense.


Former NFL cornerback Everson Walls is giving an old friend and teammate a gift for life.

The Washington Post reported that Walls has agreed to donate a kidney to former Dallas Cowboys teammate Ron Springs and that surgery is imminent.

Springs' son Shawn Springs, a cornerback with the Washington Redskins, told the newspaper that surgery could take place "any day now."

According to the newspaper, Ron Springs, 50, has diabetes and has been undergoing dialysis to get ready for surgery.

Shawn Springs offered to end his career and donate a kidney, but his father would not allow any of his children to be tested, the newspaper reported.

"Everson Walls is my dad's best friend and somebody who taught me a lot about being a cornerback in the NFL," the younger Springs told the Post.

Walls and Springs were Cowboys teammates between 1981 and 1984.


I saw a TV interview with Walls last evening. He indicated that the surgery will take place sometime in late March.
Posted by Brad Carlson at 9:55 AM