- Barring unforeseen circumstances (like a slew of GOP U.S. Senators contracting COVID-19 😞), Judge Amy Coney Barrett will be confirmed as the next U.S. Supreme Court Justice within a couple of weeks. The Democrats know this, which is why their opening statements on Monday focused less on Judge Barrett and more on anti-Trump chanting points.

You know how else we know Judge Barrett's confirmation is a fait accompli? The disgusting personal attacks against her and her family.

It’s a very weird thing to watch these old creeps congratulate a handmaid on her clown car vagina.

It does seem telling that the Republicans who have spoken so far have emphasized Amy Coney Barrett's fertility and family size. It's almost like the message is, ok you're a very successful Career Woman, but you've justified your selfish ambitions by having seven kids so it's ok. 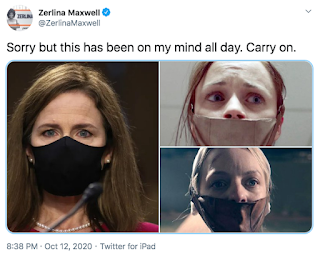 They brought Vivian home from Haiti when she was 14 months old. She weighed eleven pounds. They were told she might never be able to walk or talk normally. Don’t hate your political opponents so much that you lose sight of their humanity. https://t.co/MAKGFSyjEI

I've said it many times before and I'll say it again here. There is nothing more bigoted and intolerant than "progressives" speaking about both women & minorities who are of the conservative ilk.

- Wow. The great beyond sure is assembling itself quite the MLB roster with the cavalcade of stars who have passed away in the year 2020.

Not included in this list is pitcher Don Larsen. Even though he's not a Hall of Famer like the others, Larsen has the distinction of tossing the only Perfect Game in MLB postseason history.

By the time I became a baseball fan in the late 1970s, the aforementioned players were either retired or in the twilight of their careers. Nevertheless, I've consumed enough baseball books and documentaries to ascertain the enormous impact of each of those players.

- Rep. Maxine Waters (D-CA) has been in Congress nearly a half century. She'll likely have that seat as long as she desires. Nevertheless, it's heartening to see bold Republicans step up in an attempt to at least make her earn her electoral victories.

If there's ever been an opportunity for the GOP to at least make inroads in urban areas, it's now, especially in light of the pervasive rioting and looting major cities have endured in 2020. And every last one of those areas has been under progressive rule for decades at the federal, state and local levels.
Abraham Lincoln once said "The probability we may fail in the struggle ought not deter us from support of a cause we believe to be just." Even if candidates like Collins as well as Kimberly Klacik in Baltimore and Lacy Johnson in Minneapolis peel off 5%-10% of the usual 65+% attained by Democrats in those respective cities, that would go a long way in moving the needle.
----------------------------------------
Posted by Brad Carlson at 1:06 PM