- If I had to predict, I would say President Trump loses reelection this November. It didn't have to be this way, particularly if the man had any ounce of message discipline. I get that one of Trump's most appealing traits is his lack of being the typical politician, in that he's willing to say what's on his mind, consequences be damned.

All that said, Trump missed a great opportunity to combine facts with a sound political message when it came to his own bout with COVID-19.

If Mr. Trump recovered quickly from his bout with the coronavirus and then appeared sympathetic to the public in how he talked about his own experience and that of millions of other Americans, he could have something of a political reset. The health crisis, one campaign official said, was a setback in a re-election campaign that polls have shown him losing for months, but also a chance to demonstrate a new stance toward the virus that might win over some voters.

And the president could use that to show from now until the second presidential debate, scheduled for Oct. 15, that the disease is serious but can be combated, and that he was ready to re-enter the campaign.

While that was the hope, it was severely undermined over the last few days by the president’s own behavior — no more so than Monday when he tweeted to the nation “Don’t be afraid of Covid. Don’t let it dominate your life!” without acknowledging that, as president, he gets far better care than the average citizen. His comments signaled a far likelier reality: that the erratic handling of his illness by Mr. Trump and his aides will remind voters of his administration’s failures and efforts to play down the deadly pandemic for six months.

The President then exacerbated his erratic behavior regarding the virus by taking to Twitter on Tuesday and essentially saying the COVID pandemic is no worse than the flu despite raw data showing the exact opposite.
While the chances are nonzero that Trump will be reelected, his continued self-inflicted wounds leave very little hope that a sudden turnaround will occur.
- On the other hand, here's a very unscientific trend on how things look hopeful for Trump. 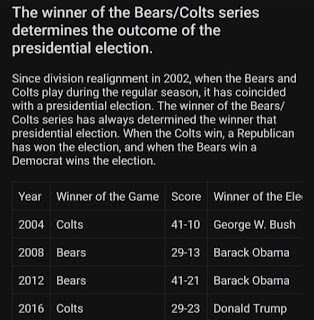 This past Sunday, the Colts defeated the Bears 19-11.
I guess my friend (and Bears bobo) Mitch Berg is incorrect when he proclaims "the Chicago Bears' fortunes tend to be a leading indicator for the nation as a whole."
- It'll never cease being creepy when people view government in this manner.

"We can no longer pretend that we don't know exactly who and what this president stands for," Michelle Obama says of Trump in a new video.

"Search your hearts, and your conscience, and then vote for Joe Biden like your lives depend on it," she says.https://t.co/Tgxb9uvmT2

Sorry, but my happiness (to say nothing of my survival) is not predicated upon who represents us in government. This is why there is such a huge divide in this country, because one side looks to make government as inconsequential as possible whereas Mrs. Obama's side views it as the potential to be a deity. Might wanna search your own heart there, Michelle.