Since there are neither corroborating witnesses nor forensic evidence, there would likely be no conviction by a jury. However, the threshold for being confirmed to the highest court in the land is much lower than the standard to be found guilty in a court of law. That's why I believe Democrats are exploiting Dr. Ford here, in that if they can plant the slightest seed of doubt in the minds of just two Republicans senators (Jeff Flake and Susan Collins seem to be waffling a tad), then Kavanaugh can be stopped via an up-or-down vote. As I've said before, Dr. Ford is now receiving the courtesy that Karen Monahan is not (at least by leftists), which is "all female accusers should be believed." Even if Kavanaugh categorically denies the incident in question? Let ABC political guy Matthew Dowd break it down for you. 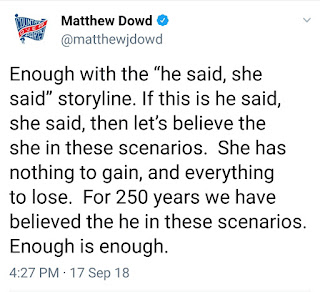 This is utterly absurd on its face. For decades women have struggled for equality, specifically to be seen as equals to men in terms of respect in areas such as employment, elected office, etc. There's simply no question that women today have orders of magnitude more opportunities than at any time in American history. That said, if an accused male's vehement denials of wrongdoing are summarily dismissed because the default sentiment should be with the female, in what sane and rational world is that equality?

Sorry, Matt. My gender (especially when innocent) should not have to pay reparations for past injustices against the opposite sex. You don't achieve justice by creating more injustice. So with all due respect, Mr. Dowd, go suck a brick.