Ryan: No vote on gun bills that ignore due process

....I thought "What a shame this even has to be clarified."

House Speaker Paul Ryan on Wednesday night dismissed the Democratic takeover of the House floor as a "publicity stunt," and said Republicans wouldn't be goaded into allowing a vote on bills that violate the Constitution.

"We're not going to take away a citizen's constitutional rights without due process," he said on CNN.

Democrats want the GOP to allow a vote on bills to expand background checks, and to prevent people from buying a gun if they are on an federal terrorism watch list. But Republicans say those lists are created without giving the people on those lists any chance to defend themselves.


In this instance, the Republicans have the ACLU as an ally, in particular against an amendment proposed by Sen. Susan Collins (R(ino)-ME).

“The ACLU strongly urges you to vote against the Collins Amendment because it uses the error-prone and unfair watchlist system, along with vague and overbroad terms, as a predicate for a proceeding to deny a firearms permit,” the ACLU officials wrote in the letter. “The Collins Amendment relies on both the No Fly List, by codifying its criteria, and the Selectee List, by direct reference.”


Naturally this serves as an opportunity for Democrats to engage in hyperbole........

Rep. John Lewis and a group of his fellow Democrats took to the House floor late Wednesday morning to stage a sit-in and are vowing to stay for the foreseeable future. Their goal? Pressure Republican leadership to hold votes on gun control legislation, something they have not done in the wake of this month’s mass shooting in Orlando, Florida.


Democrats are staging a sit-in on the House floor. They refuse to leave until our Constitution replaces due process with secret lists.
— Justin Amash (@justinamash) June 22, 2016

Finally, this pictorial illustration pretty much sums up the whole debate: 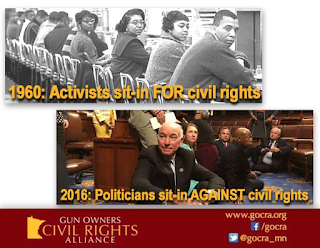