Less than a week ago I spoke with a certain Congressman from Minnesota's 2nd Congressional District. I had no inkling of the announcement he made Thursday. Perhaps I should have.

Rep. John Kline’s announcement Thursday that he will not seek re-election set off early scrambling by potential candidates in both parties for what will be a competitive open seat in the changing Second Congressional District west and south of St. Paul.

Although President Obama won the district in 2012, Kline, a Lakeville Republican, won his seventh term easily in 2014. With Kline out, a host of Republicans could join two well-funded DFL challengers plus others who may want to jump in now that the incumbent is leaving.

When asked why he was stepping down, Kline, 67, said “It’s time.” He also pointed out that in the next Congress he was scheduled to lose his powerful perch as chairman of the House Education and Workforce Committee because of term limits on chairs.

In a 30-minute conference call with reporters, Kline said “Never say never,” when asked about a potential run for governor or U.S. Senate. But he said more fishing and golf would be an early order of business upon returning to Minnesota full time.


Upon completing my prerecorded radio interview with Rep. Kline last Friday, I spoke with some of his staff regarding reelection prospects. One of the first things said is how well funded one of Kline's prospective DFL opponents, St. Jude's Medical executive Angie Craig, happens to be more than a year out from Election Day 2016. I can't say whether that was a factor in Kline's decision. However, it's pretty well assumed that a Presidential election year makes this a more daunting race given a higher turnout of Democrats in Minnesota. Combine that with the fact MN-02 is a mere R+2 district perhaps expedited Kline's decision to hand over the reins to a more fresh GOP prospect. Again, this is all conjecture on my part.

The focus now shifts to potential replacements for the Republican nominee.


I've said before that Kline is perhaps the most "conservative" Republican who can win in what is essentially a "toss up" district. If that sentiment is true. then the aforementioned GOP hopefuls would face a doubly difficult task come the general election. It's all dependent upon how much the Republican National Committee prioritizes this race.

Regardless, I thank Rep. Kline for his service. 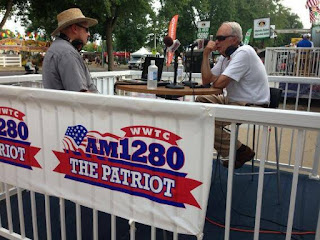 See you next year at the MN State Fair, Congressman, in what will likely be your final Northern Alliance Radio Network appearance as a U.S. House member.