- So President Obama chided Congressional Republicans for going home over the Holidays without extending unemployment benefits, eh? I'm certain it wasn't lost on anyone with a pulse that this statement was made while Obama himself was on a(nother) luxurious vacation. Of course one would have to possess an ounce of shame to be concerned with the bad optics. But I believe that in the President's mind this isn't such an outlandish scene. After all, Congress can very easily pass an extension of unemployment benefits and Obama's "autopen" can sign off on said appropriations bill without his ever having to leave Hawaii.

Once the President decided to grace the mainland with his presence this week, he responded to critics who claimed that extending unemployment benefits only exacerbates one's lack of urgency in searching for work.

"I've heard the argument that says extending unemployment insurance will somehow hurt the unemployed because it saps their motivation to get a new job ... That really sells the American people short. I meet a lot of people as president of the United States ... and I can't name a time where I met an American who would rather have an unemployment check than the pride of having a job."


Having been unemployed for weeks at a time a couple of years ago, I agree with the President's take there. And I imagine even his most ardent detractors would echo that sentiment. But what President Obama fails to see is the fact that during his time in the White House, hundreds of billions of dollars have been spent in the name of economic "stimulus." Unfortunately, all that spending has done is create conditions which have lengthened the tenure of unemployment for many Americans. Yet somehow he's convinced himself that voting for unemployment insurance "creates jobs." Have fun selling that one.


- Hey, Florida State is the champion of college football. Apparently they defeated the Auburn Tigers Monday evening by a score of 34-31 to capture the school's third ever National Championship.

Initially, the university's online store seemed a bit confused about the outcome. 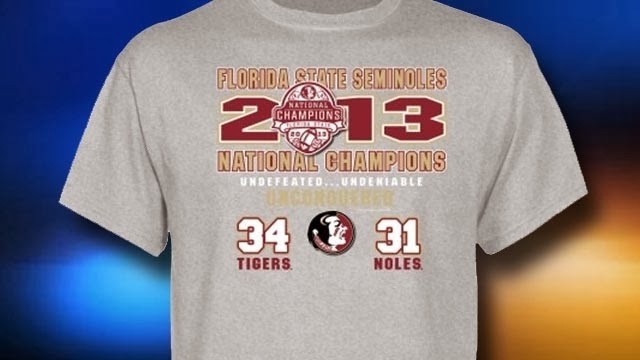 Fear not, as no one actually purchased a t-shirt with the incorrect score.

A spokesman for Fanatics, Inc. -- the site's Jacksonville-based parent company -- later blamed the product's quick turnaround for the problem with the T-shirt image.

"As a company that prides itself on providing the best shopping experience for sports fans, we go to great lengths to display hundreds of championship items as efficiently as possible immediately following each championship game," Meier Raivich stated in an email to FOX 13 just after 3 p.m. "Unfortunately, during the process of uploading images quickly so Seminole fans can celebrate the big victory, one FSU t-shirt image inadvertently reflected the incorrect final score. Once the error was detected, it was immediately corrected. We apologize for any inconvenience this may have caused."


I'm sure Noles fans will get over it.


- There are many aspects of Al Franken being a U.S. Senator which grate on my nerves, not the least of which is he represents my state. Not only that, it also deludes other vapid celebrity types into thinking they have a shot to go play politician in D.C.

Former “American Idol” finalist Clay Aiken, who lost the singing competition's second season to Ruben Studdard in 2003, is “actively considering” a run for North Carolina’s 2nd congressional district in the U.S. House, according to the Washington Blade.

Sources told the Blade the openly gay singer has been making phone calls to gauge potential support as he works with Betsy Conti, a local political strategist who has worked with Al Gore and former North Carolina Gov. Bev Purdue.

A source added that Aiken was in Washington DC last month to meet with pollsters, and the “Idol” star has already been “sounding and acting like a candidate.”

It’s unclear when Aiken may announce his decision to run for the House seat, currently filled by Rep. Renee Ellmers, R-N.C.


Ellmers currently represents CD 2 in North Carolina which, according to the latest Cook PVI report, is an R+10 district. In addition to that, President Obama lost in that very district by 13 points in 2008 and 16 points in 2012. So given that NC-02 is a such a heavily leaning Republican district, the right-of-center constituents are sure to be reminded of what Aiken thinks of them. While on Twitter during the Republican National Convention in August 2012, Aiken tweeted out the following:

Playing drinking game with my brother now. We drink every time we see a black person on screen at the RNC convention. #soberasamormon

Exhibiting such courage in his conviction that the GOP is an all white party, Aiken later deleted that tweet (good thing "Twitchy" is forever).