Earlier this week, I was invited to an event slated to take place this Sunday. 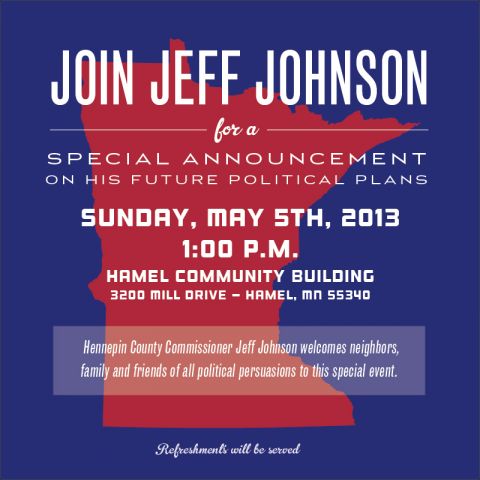 Since I will be conducting hosting duties of my weekly radio program right when that event begins, I am unable to attend.

Then today I received the following email:

WHAT:
Making a major announcement on his future political plans

WHERE:
Hamel Community Center, 3200 Mill Drive, Hamel, MN 55340
(Hamel is just west of Plymouth on Highway 55; the announcement will be indoors)

*Note: Johnson will be available to answer questions from the news media on-site following his announcement

Let's see. The photo attached was saved as a jpg file titled "JJ4G-Announcement." Then I noticed the person listed under "CONTACT", Gregg Peppin, having a very specific email domain.

Huh. Perhaps someone attending the meeting can call my radio show Sunday upon the official announcement to inform us what this all entails. We'll unravel this mystery yet.

Just checking in, thanks for the radio show and saying your blog online, I will try to keep up with it, love the Patriot Radio