- Because leftists often have few (if any) facts to support their "progressive" worldview, they often rely on caricaturing the political right, utilizing ad hominem straw men, etc.

South Bend mayor (and one of several Democrat presidential candidates) Pete Buttigieg has recently focused his ire on President Trump's administration, specifically the "hypocrisy" of Christians within Trump's team or supportive of the current POTUS. Inevitably, Vice President Mike Pence gets caught in the verbal cross hairs.

"If me being gay was a choice, it was a choice that was made far, far above my pay grade," Buttigieg said. "And that's the thing I wish the Mike Pences of the world would understand. That if you got a problem with who I am, your problem is not with me -- your quarrel, sir, is with my creator."


And if you, Mr. Mayor, believe men shouldn't stand up for a child about to be killed mere moments before birth, your quarrel is with my creator.


This is perhaps the most oft used straw man, where one conflates opposition to gay marriage with despising gay people. Also, does Buttigieg forget that Pence was once governor of his home state? If Pence showed any animosity towards him in 2015 shortly after his "coming out," the then Indiana governor had a funny way of showing it.

"I hold Mayor Buttigieg in the highest personal regard. We have a great working relationship. I see him as a dedicated public servant, and a patriot."

The Cavaliers win was historic for a couple of reasons. For starters, just last year they became the first top seed to lose in the first round since the tournament expanded to 64 teams in 1985. 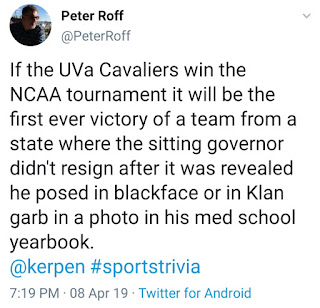 
- Democrat presidential candidate Bernie Sanders has vowed to release 10 years worth of his tax returns by Tax Day on Monday. As such, he's implored President Trump to do the same.

“Not being a billionaire, not having investments in Saudi Arabia, wherever he has investments, all over the world, mine will be a little bit more boring,” Mr. Sanders said.

Reminded that he is a millionaire, he did not shirk from the description.


Whoa, whoa, whoa, what's this?!?!?! You're invoking capitalism here, Bern? What about those of us who don't have the clout or notoriety to write a best-seller?

How about some consistency here, Gramps. Time to start divesting and spread the wealth around posthaste.

Ah, that old argument about sexual orientation not being a choice. That is arguable, but barely. Homosexual BEHAVIOR, however, is always a choice, as difficult as it may be for some with the psychological condition. Were it not so, then we would simply kill, at birth, every child with a "criminal orientation." Why not?

Buttigieg's comments to Pence bring John 8:44-45 to mind for some odd reason. He didn't inherit a great city--South Bend's been hurting ever since Studebaker closed in 1963--but arguably he's making it far, far worse.

Thanks. Now I have a way of referring to those Climate Change hucksters. Did you know that man-made CO2 is essentially irrelevant to the climate?