If there's one venue which triggers memories more than most, it's music. Whenever I listen to Sirius XM radio channels '70s on 7, '80s on 8 or '90s on 9, I recognize the vast majority of the tunes being played. My favorites are the ones which help me remember at which point I was in life when said tunes were hits.

When The Eagles released the album Hotel California, I was in second grade. Sure, I was too young to understand the lyrics of the title track as well as other hits such as "Life in the Fast Lane" and "New Kid in Town." Nevertheless, the guitar riffs, drum beats and keyboard licks were immediately identifiable. And while I couldn't name one band member, I was able to easily ascertain that there were different lead singers at the helm for "Hotel California" and "New Kid...."

It was the early '80s when I really started to appreciate music and the artists who performed it. It was this time frame when I often heard radio DJs introducing tunes from "Eagles co-founder Glenn Frey." Frey had success with his solo work, often faring much better with tunes from TV and movie soundtracks. "The Heat is On" from the film Beverly Hills Cop and "You Belong to the City" from the TV show Miami Vice were both Top 5 hits. And thanks to classic Twin Cities rock stations like 92 KQRS, I was able to indulge in Frey's work with The Eagles. To this day, I still have two of The Eagles' greatest hits albums plus Frey's first three solo albums all on cassette. Yes, those were played on heavy rotations during my 30-minute commute to college in the late '80s/early '90s.

Despite Frey's 1988 album Soul Searchin' not having the same tremendous commercial success as, say, his soundtrack work, two of my favorite Frey tunes came from that album. For many many years, I fantasized about having the pipes to sing "True Love" to that special lady in the same vain as Frey belted it out.


And while it may sound a tad corny, the song "Livin' Right" actually does give me a little extra juice while I'm exercising.


When The Eagles reunited for their Hell Freezes Over tour in 1994, I tried in vain to tickets when they made a stop in the Twin Cities. After not partaking in any of their handful of stops in Minneapolis/St. Paul over the next two decades, a high school classmate (and fellow Eagles enthusiast) strongly encouraged me to check out the band at a scheduled Target Center appearance. I didn't immediately jump on tickets when they went on sale in the spring of 2013 as they just seemed so darn expensive. As September 18, 2013 (the date of the actual concert) arrived, my high school pal Lisa asked if I was attending. I told her I was not. She then implored me to scour Stub Hub for some cheap tickets since this may be the last opportunity to ever see the band live. Lisa's persistence paid off as I was able to find an "obstructed view" ticket for about $95. Turns out, my view wasn't all that bad. 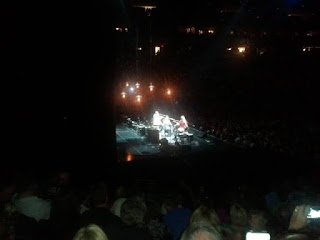 Here's a brief clip from that night, featuring the classic Eagles tune "Take It Easy" with Frey on lead vocals.

I hadn't really thought about it until that evening in September 2013, but Frey had been a significant part of my life's soundtrack. That fact was further emphasized when I learned of his death via the Eagles' Facebook page.

It is with the heaviest of hearts that we announce the passing of our comrade, Eagles founder, Glenn Frey, in New York City on Monday, January 18th, 2016.

Glenn fought a courageous battle for the past several weeks but, sadly, succumbed to complications from Rheumatoid Arthritis, Acute Ulcerative Colitis and Pneumonia.

The Frey family would like to thank everyone who joined Glenn to fight this fight and hoped and prayed for his recovery.

Words can neither describe our sorrow, nor our love and respect for all that he has given to us, his family, the music community & millions of fans worldwide.

Even though Frey is no longer with us, his 4+ decades of work will always be here. But it sure would have been nice to hear the entire gang (Glenn, Don, Joe, Timothy et al) in person just one more time.

Email ThisBlogThis!Share to TwitterShare to FacebookShare to Pinterest
Labels: Music