Despite all the problems the NFL has endured in recent years with such things as concussion lawsuits, the Saints' bounty scandal, "Spygate" and a rash of player arrests, the league is more popular than ever. With seemingly unlimited financial resources, teams can fend off pretty much anything thrown at them.

There's been a lot of renewed indignation lately over the Washington Redskins' nickname, with newspapers and TV stations refusing to utter the team's name. Heck, a sitting US Senate majority leader has called even called them out. In addition, an agency of the Federal government took action in an effort to get owner Daniel Snyder to acquiesce to dropping the allegedly offensive nickname. Despite the onslaught, Snyder has not bowed to the pressure.

When the Philadelphia Eagles signed QB Michael Vick prior to the 2009 season, there was outrage among the animal rights community, including protests at the Eagles facility. This was due to Vick's incarceration due to running a dog fighting ring. He went on to play five seasons in Philly.

Yes, it would appear that trying to force an NFL franchise to change course via high profile protests is the equivalent of firing spitballs at an aircraft carrier.

I've said it so often before and I'll say it again here. Unless an NFL team takes a significant hit in the pocketbook, there's really no incentive for a franchise to do anything other than exactly what it desires to do.

In light of the Vikings announcing that star RB Adrian Peterson will play this Sunday despite being charged with negligent/reckless injury of his 4-year old son, there has been much outrage expressed by the general public (specifically casual and/or non football fans). Naturally, the Vikings will stand by their statement of letting the legal system do it's thing.

However, that tone may very well change in light of a statement put out Monday evening by Radisson hotels.

Radisson takes this matter very seriously particularly in light of our long-standing commitment to the protection of children. We are closely following the situation and effective immediately, Radisson is suspending its limited sponsorship of the Minnesota Vikings while we evaluate the facts and circumstances.

At 2:00 pm Monday afternoon, Vikings GM Rick Spielman addressed the media before coach Mike Zimmer's weekly press conference. This was to handle all inquiries regarding Peterson. Say, did anyone else happen to notice the sponsor name on the banner behind Spielman as he was addressing the Vikes' controversial decision? 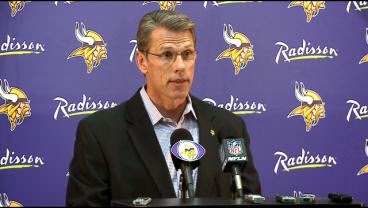 Granted Radisson (in its words) had only a "limited" sponsorship with the Vikings. But could this be just the beginning? How many other big name sponsors will be looking to distance themselves from this situation? And how much more difficult is it now for Vikings ownership to sell naming rights for the new stadium slated to open in just under two years? Remember, of the nearly $500 million the Wilf family has committed to the project, they are relying on approximately 250-300 million dollars in revenue generated from naming rights.

I wouldn't be shocked if the Vikings brass is privately hoping for NFL Commissioner Roger Goodell to swoop in and levy a suspension of Peterson. Seems to me that's the only way Zygi Wilf & Co. can save face at this point.