If you read headlines of any newspaper or internet story, you realize that the objective of these pithy phrases is to persuade you to indulge in the accompanying story. With so much content to consume, headline writers are often creative to the point where the actual headline may be the most worthwhile part of an article or post.

The more popular tactic involves a play on words, whether it be a double entendre or some sort of pun (e.g. Red Sox sink Mariners; White Sox tame Tigers, etc.). Sometimes headlines can be unintentionally hilarious (there really are small towns in Minnesota named "Fertile" and "Climax." As such, it once lead to this).

There are also innocently written headlines that turn into unfortunate puns based on the person involved. Vietnam War vet (and former U.S. Senator out of Georgia) Max Cleland supported fellow Democrat John Kerry for President in 2004. Now when a politician goes to speak to a crowd of folks at, say, a campaign rally, he/she is "on the stump." Cleland, who lost his right forearm and both legs above the knee due to war injuries, was going to actively campaign on Kerry's behalf in New Mexico, leading to a June 2004 headline of "Vet Cleland to stump for Kerry." The vast majority of the time it's an innocuous statement. But when it refers to a person who is missing a forearm and two legs, it gives the unintentional vibe of being insensitive to Cleland.

Because it was indeed a "frightening" scene, the Sun-Times went with the following: 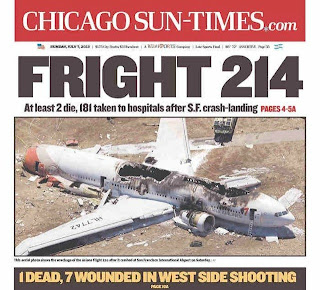 Notice the play on words. It wouldn't have been as salient an issue, save for one minor detail: the majority of passengers, obviously, were of Asian descent.

The headline, "Fright 214," can be seen as an unfortunate attempt at a punny headline. The Asian American Journalists Association, however, called out the Bright One on their attempt at being clever and added the headline also served as another example of "Engrish" in the media. AAJA was offended both by the headline and what they considered to be racist undertones, considering two-thirds of the passengers were Asian.

Kirk responded to AAJA's criticism. “There was nothing intentional on our part to play off any stereotypes. … If anybody was offended by that, we are sorry," Kirk said. "We were trying to convey the obviously frightening situation of that landing.”

AAJA commended Kirk for his prompt response and added it was possible the Sun-Times newsroom "lacked the diversity of voices on staff that might have questioned the appropriateness of the headline."


I would be hard pressed to believe the headline writer in this situation was perpetuating a racist stereotype. But at the very least, the utmost discretion should have been used in a case where there are deaths and/or critical injuries. Had said discretion been applied, the whole flap is avoided.

With that in mind I recall another controversial headline involving an athlete of Asian descent. In February 2012, New York Knicks point guard Jeremy Lin was the focal point of the Knicks' seven game win streak. When the streak was snapped later that month, an ESPN.com headline read "Chink in the Armor: Jeremy Lin's 9 Turnovers Cost Knicks in Streak-stopping Loss to Hornets." 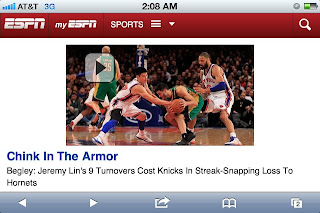 Now the phrase "chink in the armor" refers to a flaw in an otherwise fine body of work. It's analogous to a weak spot in a figurative suit of armor. Again, the phrase alone isn't racist. However, when the subject of the headline is a person of Chinese descent and "chink" is a derogatory word for a Chinese person, it then becomes a woefully unfortunate double entendre. Again, was the writer racially insensitive? No way to know for sure. But aren't there publishers and copy editors who keep an eye out for this sort of thing?

It's all a lesson in context.

Email ThisBlogThis!Share to TwitterShare to FacebookShare to Pinterest
Labels: Misc.