Governor Mark Dayton is one of the more tactless and unpolished politicians I've ever heard. For example, when MN Republicans controlled both chambers of the Legislature in 2011-2012, they looked to decrease growth in spending. Remember, the GOP was perfectly willing to passed a budget that saw a 5-10% increase over the prior biennium budget. But the fact they didn't want to acquiesce to a package that saw almost a 20% hike resulted in the governor calling such action "drastic" and "draconian." Seems a bit hyperbolic considering legislative Republicans actually alienated many in their base by allowing state government to grow. Nevertheless, 5-10% growth of government is apparently not enough "progress" in the eyes of the liberal Dayton

Fast forward to Thursday morning. A group of daycare providers filed a lawsuit in federal court challenging a law passed in May which forces their private, independent businesses to become part of a public employees union.


By the way, here's a photo of these "extremists" that has got Dayton all in a tizzy: 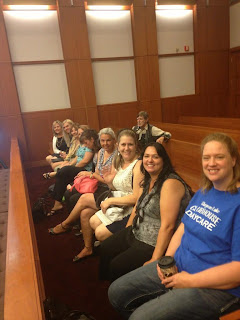 
The lawsuits, filed by several child care providers, claim the unionization measure Dayton signed into law in May is unconstitutional and violates federal labor law.


Since the entire DFL House caucus as well as Dayton himself are up for reelection in 2014, it's fortuitous for MN Republicans in the sense they've been given a buffet of campaign slogans. Since the daycare unionization measure passed the House by a razor thin 68-66 vote (with zero GOP members voting "yea"), literally ever DFLer who voted for it was in essence the deciding vote. Had just one "yea" vote flipped to a "no", the bill would've failed.

Then there's Dayton himself. Signing the bill that forces these daycare providers to unionize means many of them will pass off the increased costs (thanks to union dues) on to the families who utilize their services. Worse yet, some providers may cease to stay in business. And if some providers choose to stay in business but refuse to join the union, they will be ineligible to take in children whose care is subsidized by Child Care Assistance Program (CCAP). If that happens, suddenly many low-income families are saddled with fewer choices in terms of child care. Exactly how does that benefit the hard working families whom you considered such a high priority, Gov. Dayton?

In the end, this is all about payback. Public Employee unions and the PACs they funded ended up funneling upwards of $12 million to DFL candidates in the 2012 election cycle. A bunch of independent-minded childcare workers (aka "right-wing extremists") seem intent on interfering with that transaction. And that has Gov. Dayton a little surly.