The latest cover of Time magazine and how they're depicting the Trump administration: 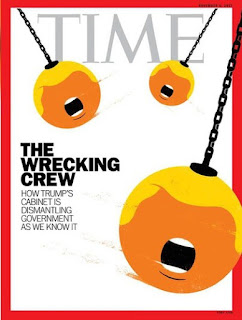 I've been far more critical than praising of President Trump in my overall assessment of his presidency. But the notion that his cabinet is "dismantling government as we know it," specifically a government with unprecedented influence in our everyday lives, is absolutely a good thing.

There are few better examples of highlighting differences between the political left and political right than to gauge reaction to the shake up of the status quo in Washington, DC.