I still believe my favorite NFL squad is a playoff caliber team. However, a run to the Super Bowl is now likely out the window.

Minnesota Vikings quarterback Teddy Bridgewater suffered a dislocated knee and a torn ACL when he went down during a noncontact drill at practice Tuesday, ending his 2016 season.

"Teddy suffered a complete tear to his ACL and other structural damage," the team said in a statement Tuesday evening after Bridgewater underwent an MRI. "Fortunately, there appears to be no nerve or arterial damage."

Bridgewater dropped back to pass during a drill, planted his foot and immediately went down. Trainers rushed to his side and began inflating an aircast, and the quarterback appeared to be holding his left leg.

Several players threw their helmets and shouted expletives as they scattered, and many simultaneously dropped to one knee in prayer. Moments later, a siren-blaring ambulance pulled into the team's Winter Park headquarters, stayed for about 10 minutes and then pulled away.


After winning the NFC North Division last season on the strength of a strong run offense and a young up-and-coming defense, it was surmised that the quarterback position needed to take a decent step forward if the team was to reach the next level. As such, Bridgewater and his receivers met regularly in the offseason in an attempt to become a more cohesive unit. It appeared as though it was paying off as Bridgewater looked sharp in his two preseason starts.

Everything was firmly in place for 2016. A Super Bowl caliber defense along with a more potent offense debuting in a brand new stadium.

But after the events of Tuesday afternoon, many of my fellow Vikings fans feel this is still applicable: 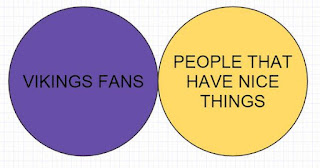 There is little behind Bridgewater on the depth chart. Shaun Hill is the primary backup, but he's 36 years old and has played only sparingly over the past five years.

"I have confidence in Shaun. I think he's played great this preseason," (Vikings coach Mike) Zimmer said. "The thing we all have to remember is this is about the team. We have a good team."


Again, I still believe that the Vikes will be in contention for a wildcard berth this season. However, it would still behoove the organization to explore bringing in a veteran QB who has actually, unlike Hill, had recent success (NFL writer Marc Sessler has a list of possibilities).

Say, Hy-Vee grocery stores recently came to Minnesota. It may not hurt if Rick Spielman and his family decide to shop there on a regular basis. You never know.......

It's too bad. Bridgewater seems like a great kid and he was improving. This will be a good test for the coaching staff; if they can scheme around the loss of their quarterback, the Vikes will still have a very good defense. A see a lot of 20-17 games this season.