Book recommendation: In the Arena

I've been saying for some time that I want to start indulging in more reading of books. As such, I've chosen to start with In the Arena. 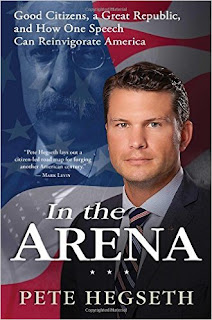 Pete Hegseth, who is a decorated Army vet, Fox News contributor, Minnesota native and a personal friend of mine, penned this fantastic read. It's very timely, as it encourages American citizens to become more active on behalf of their country and not apologize for American exceptionalism.

The book title is a key phrase from a 1910 Teddy Roosevelt speech entitled "Citizenship in a Republic."

It is not the critic who counts; not the man who points out how the strong man stumbles, or where the doer of deeds could have done them better. The credit belongs to the man who is actually in the arena, whose face is marred by dust and sweat and blood; who strives valiantly; who errs, who comes short again and again, because there is no effort without error and shortcoming; but who does actually strive to do the deeds; who knows great enthusiasms, the great devotions; who spends himself in a worthy cause; who at the best knows in the end the triumph of high achievement, and who at the worst, if he fails, at least fails while daring greatly, so that his place shall never be with those cold and timid souls who neither know victory nor defeat.


Hegseth certainly knows of what he speaks. While having served as an officer in the Iraq war, Hegseth was one of few individuals willing to go on national news shows around 2005-2006 to defend the operation despite it being at its most unpopular. He went to toe-to-toe with insufferable MSNBC host Chris Matthews several times, with Pete rarely being able to finish a statement uninterrupted. Funny how Pete stopped receiving invites to appear on news shows when the troop surge in Iraq, which was first implemented in 2007, began to succeed.

Anyhow, I highly recommend In the Arena, which is available on Amazon as well as any brick-and-mortar bookstores.

Email ThisBlogThis!Share to TwitterShare to FacebookShare to Pinterest
Labels: Books