I've left jobs before. It was never really a big deal because I never cultivated a lot of close friendships amongst my fellow co-workers. I didn't feel as though I was being snobbish as much as I just didn't have a lot in common with those people.

But this job was different.

As my boss and I mutually agreed this past Friday that I would stay on at my workplace until I find new employment or until November 30 (whichever comes first), I felt a sense of overwhelming relief. It's been a hellish past six weeks for a myriad of reasons, none of which are relevant to this post. But as I broke the news Monday, I realized today how much I'll miss my co-workers.

When I was hired in March 2008, it was almost as if I was meant to work there. In getting to know some of my colleagues, I learned that my co-worker Tammy just weeks earlier married a guy Russ who was in the same class as my brother from Kindergarten thru High School graduation! And despite being stark opposites politically, the I.T. guy Kevin and I could spend literally several consecutive hours discussing the Vikings, the Timberwolves and 80s pop culture.

I've enjoyed some of the frivolous times, like the opportunity to manage the company softball team! 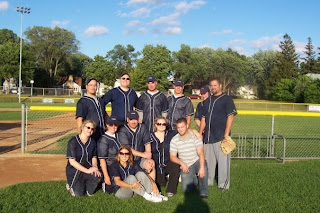 I've also had the sheer joy of welcoming new additions to co-worker's families. 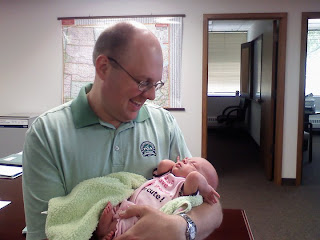 I guess transition (I've come to loathe the word "change") is a part of life. As a person who can be somewhat routine oriented, there is a slight amount of apprehension. But at the same time, I enjoy opportunities to thrive in a brand new setting.

Whatever this new adventure may bring, it is my sincere hope that the friendships of my now temporary office will endure into the future.

Email ThisBlogThis!Share to TwitterShare to FacebookShare to Pinterest
Labels: Jobs, Me

Best wishes, Brad. You'll be in our prayers for a successful job search.

Uff, not the easiest thing to be doing right now. But your hope is where it needs to be.