-Bubble-headed hack Nick Coleman is outraged, OUTRAGED that a scurrilous wingnut buh-law-ger is digging into the personal records of twice-divorced gubernatorial candidate Mark Dayton. While I'm not a huge fan of such practices, I would advise Nick to cut the self-righteous bullcrap. In 2006, I recall Nick raising exactly ZERO objections to his Star Tribune colleagues drudging up a 1995 domestic abuse arrest of Alan Fine, who was the GOP candidate in MN CD5. What was buried deep in that story was the charge against Fine was eventually expunged from his record, and completely ignored was the fact Fine's ex-wife continued to rack up domestic violence charges.

Thankfully in 2006 my buh-law-ger pal Mitch Berg was kind enough to do the work that Nick and his fellow shills were unwilling to do.

-The Gallup Poll is hardly considered a right-wing spin machine. And that's why the latest Gallup tracking is so shocking.

Republicans lead by 51% to 41% among registered voters in Gallup weekly tracking of 2010 congressional voting preferences. The 10-percentage-point lead is the GOP's largest so far this year and is its largest in Gallup's history of tracking the midterm generic ballot for Congress.

When the the GOP made historic gains in the 1994 election season, I recall President Bill Clinton, who was midway through his first term, basically conceding that he received loud and clear the voters' message. So if Congressional Republicans make similar inroads in two months, I find it incredibly unlikely that the White House's current occupant will show anything resembling humility. Call it a hunch.


-This Saturday from 11:00 a.m. until 1:00, Kevin Ecker and myself will be hosting The First Team edition of the Northern Alliance Radio Network an AM 1280 The Patriot. We'll be live on location at the Minnesota State Fair, with our booth residing at the corner of Dan Patch Ave. & Cosgrove St., just inside the main entrance off Snelling Avenue. Thus far we've booked as guests Joel Demos, the GOP endorsed candidate who will oppose incumbent Keith Ellison in Congressional District Five, and MN Sen. Chris Gerlach (R-Apple Valley). Come on out and say hello if you have a chance!

-It's no secret the election years of 2006 and 2008 have been utterly disastrous for Congressional Republicans. Despite that, Rep. Michele Bachmann has emerged victorious in both election cycles, meaning she'll likely be our Congresswoman here in MN CD6 for as long as she desires. Nevertheless, Bachmann's latest DFL sacrificial lamb opponent, Taxin' Tarryl Clark, believes she can garner enough support by having some big names campaign on her behalf. The latest? Former VP Walter Mondale.

Yeah, nothing enhances electability more than a politician who holds the ignominious accomplishment of losing a statewide election in all 50 states.


-There isn't much (if anything) Tom Emmer could do to lose my support for becoming the next Governor of Minnesota. And I thoroughly enjoyed his initial TV ad. Unfortunately, I'm getting a sense that he's doing little more than speaking in platitudes. Granted, I know that's how the White House's current occupant got elected. But I don't see a Republican in Minnesota being able to turn that trick. That's why I am reallllllly looking forward to the debates. Emmer will be in his element and thus forced to convey his strategy for creating jobs, cutting taxes, etc.


-It's official: Tiger Woods and wife Elin have divorced.

The marriage was described in court documents as "irretrievably broken" with no point in trying to reconcile. Terms of the divorce were not disclosed, except that they will "share parenting" of their two children.

I've said it before and I'll say it again: When....ahem....."adult film stars" say Tiger is in to some freaky stuff, there is no way he could ask the mother of his children to engage in such "activities."

....I am NOT within the borders of the United States of America!

The fetching Mrs. Carlson and I are enjoying ourselves in Niagara Falls this weekend (Belated tenth anniversary getaway)!

Sometimes it's best to let photography do the talking. And since we're visiting one of the Seven Wonders of Canada, this would be no exception. 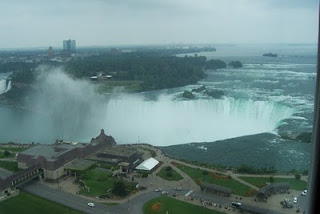 A view from our top floor suite at the Marriot! 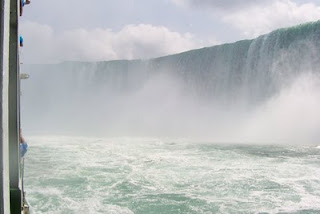 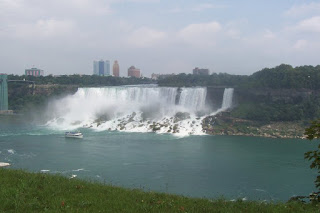 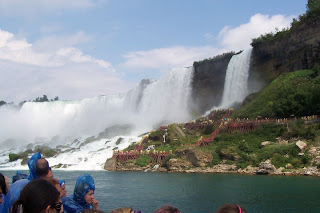 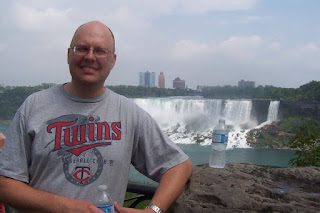 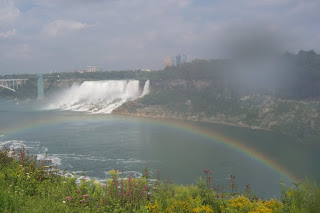 -I was in line to vote in the MN primary Tuesday before the doors opened at 7:00 a.m. As I approached the teller to give her my name, she asked for my address. However, I merely handed her my driver's license with all the information. She was delighted that I so kindly streamlined the process.

A photo ID check to find out if I'm registered. Hmmmm. There oughta be a law.


-My commute to my workplace is approximately 25 miles one way. Then this past week our CEO informed us we will be relocating our office to an area of Bloomington which will add 10 miles to my morning drive. As a result, I've thrown out not-so-subtle hints about allowing employees to work 2-3 days per month from home, since we can access all the files we need via our company issued laptops.

So when I went into his office for a meeting today, there happened to be a business periodical strategically placed on his conference table. The headline article was titled "The Perils of Flextime."


-The one thing about putting in 50-plus hour work weeks this month? I haven't been snacking nearly as much. When I stepped on the scale today I saw I was the same weight as the day I got married ten years ago!

You really didn't expect that Brett Favre would just show up to Vikings headquarters in Eden Prairie, MN without some sort of sideshow, did you?

On Tuesday morning, the internet lit up like a pinball machine with the speculation that Favre would not return for a 20th season and thus would retire for the third time in 2-1/2 years. Amazingly, a fair amount of my fellow Vikings rubes feel this is really the end. One minor flaw, though: We have yet to hear anything from Favre himself, so who knows how all the retirment rumors came about. But I have a feeling Favre doesn't mind the speculation. After all, if it bothered him in the least, he could end all the quibbling with one felt swoop of his signature on NFL retirement papers.

In late July of last year, Favre opted to stay retired because he felt he couldn't physically play at a level that was acceptable. But a few weeks later Favre was being chauffeured (courtesy of coach Brad Childress) to Vikings headquarters to sign a two-year contract. My suspicion is Favre's concern about his physical well being was being overblown in an effort to provide an alibi for potentially shoddy play during the regular season.

So do I think Favre is now exaggerating the condition of his surgically repaired ankle? Not really. But like last year, he seems to be seeking reassurance that the Vikings coaching staff really wants him to give it a go. Again, I'm certain Favre doesn't mind it when an organization fawns all over him, something the Green Bay Packers refused to do in the Summer of 2008.

Despite not being able to walk away the past few years, Favre may actually retire this time. As a result, this may infuriate a fair amount of the Vikings faithful. But it would be wise not to direct that anger towards Favre himself. You see it was the Vikings brain trust who pinned their hopes on Favre returning for the 2010 season despite never receiving one reassurance from the QB himself. In the mean time, Donovan McNabb was very much available in a trade had the Vikings decided to go that route. It would have cost them nothing to cut Favre loose since he had no guaranteed money owed him. 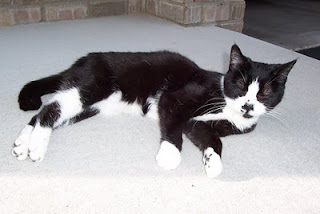 When my wife Jennifer was six years old, she received a cat for Christmas. Ever the precocious child, Jen named her cat Ebenezer Scrooge, aka "Ebby."

In May of 1991, while in her sophomore year of college, Jennifer lost her childhood pet to a lingering illness. Naturally, Jen was inconsolable at the loss of her beloved Ebby as he grew up with her.

As it so happened, Jen's mom would be visiting her at her Winona St. campus apartment the day Ebby passed. On the way to Minnesota from Chicago, mom decided to stop by a local veterinarian's office where she knew a litter of kittens had been born weeks earlier. There was one cat remaining, which happened to be the runt of the litter. What mom saw was a scrawny black and white kitten with a stubby tail. This cat was also feisty, as she like to gnaw on hands and knock over anything standing (A plant. A desk lamp. You name it). My wife was appreciative of this new cat and decided to name her Bathsheba.

In 1993-94, while student teaching in Cottage Grove, Jen lived with her folks in River Falls, WI. When Jen would come home in the evenings, Bathsheba could hear the car coming down the street. As a result, this cat would jump into the sink to look out the kitchen window which had a view of the driveway.

The following year, Jen accepted a position to teach in south Texas (eight miles from the Mexican border). While driving from MN to TX, Bathsheba would either lie in Jen's lap or at her feet. And if there was ever an instance they had to stop at a toll booth, Bathsheba would awake and instantly hop in Jen's lap so she could look out the window.

Like most cats, Bathsheba had a routine which she did not like interrupted. At night she would sleep on the other pillow in Jen's bed. So when Jen and I got married, Bathsheba took to growling at my head while I was asleep in her spot. She also expected her food promptly at 6:00 am everyday.

In our married life, Jen and I have moved three separate times. And every time we transported the cats (we've added two since we got married), Bathsheba would always have to take her customary spot in Jen's lap.

The past two years it's been obvious that Bathsheba was deteriorating. Her left eye was completely glossed over due to cataracts, her right eye was also getting cloudy, her hearing was nearly non-existent and she had pretty much become emaciated. Saturday was the third consecutive day which she refused to eat, which pretty much sealed our decision. Bathsheba could no longer endure the simple routines of a cat's day-to-day life.

After a few phone calls, an animal hospital in nearby Andover would accommodate our request to end the suffering of our beloved pet. With much sorrow, Jen placed Bathsheba in a sizable box containing a comfortable blanket. Naturally, the cat would not acquiesce. She insisted on her normal position while in a vehicle: Jennifer's lap. Loving and loyal until the end.